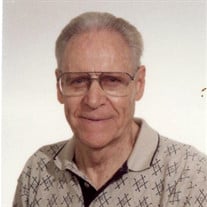 Max Overby, age 96, of Marion, IL, passed away peacefully with his family by his side, at 5:05 p.m. on Tuesday, October 8, 2019, in the Heartland Regional Medical Center of Marion. He was born on Sunday, October 7, 1923, in Johnston City, IL, one of 10 children of John Muir and Effie Maude (Evans) Overby. Max attended school in Johnston City and was a graduate of Johnston City High School Class of 1942. He answered the call of this nation during the time of WW II by serving in the United States Army Paratroopers from 1943, until the time of his honorable discharge on October 27, 1945. On April 25, 2017, Max was honored to be on board the Veteran’s Honor Flight to Washington D.C. After he returned from the service he continued his education attending Lockyear Business College of Evansville, IN for 2 years. Max was united in marriage to Mary Jean Clark on Saturday, December 25, 1943, in Marion, and together they have shared nearly 76 years of marriage. His working career began with Diagraph Bradley located in the Ordill Area west of Marion. Then in 1951 he began working at the Marion Veteran’s Hospital as a Registered Assistant and remained there for 12 years. After that he began working at the Marion Federal Prison in December of 1963, in the Accounting Department and remained there until his retirement in 1979. After his retirement he continued working at various jobs in the area including the Marion Federal Prison Credit Union, also as a bailiff for Sherriff Jerald Kobler, a jailer for Sherriff Harry Spiller, he managed the Marion House of Color and finally with the Marion Housing Authority until he decided to retire in 1988. After retirement Max and Mary Jean bought a home in Punta Gorda, FL where they spent the next 14 winters, from October to March, until they decided to sell their home in March of 2003. Max has been a faithful and active member of the Heartland Christian Church of Marion since 1986. He also was a member of the American Federation of Government Employees (AFGE) Local Union No. 2343 of Marion. In his spare time his passion was playing tennis for over 40 years and was on a traveling team having an outstanding winning record and won many trophies. He also was an avid St. Louis Cardinal fan and had even enjoyed watching their most recent game in the play offs against Atlanta last Monday. He also enjoyed spending time on his computer and watching his hummingbirds. He loved his family, church family and his many friends. He always enjoyed anytime they would get together and was always interested in all of their many different activities. The many memories that have been created will now be cherished by those he leaves behind. He is survived by his wife, Mary Jean Overby of Marion; son, David Gene Overby of Phoenix, AZ; granddaughter, Melanie, four great grandchildren; brother-in-law, John Hartkopf and his wife, Elizabeth of Marion; special friends, Kerry Meyerhoff and her husband, Allan of Makanda, IL and Brenda Moake of Marion, other extended family and many friends. He was preceded in death by his parents; five sisters, Helen Johnson, Hazel Catanzaro, Doye Overby, Virginia Overby and Shirley Treeloggen; four brothers, Muir Edward Overby, Russell Overby, Harry Kenneth Overby and Jack Quentin Overby who was killed in battle in Italy during WW II. Arrangements were entrusted to Wilson-McReynolds Funeral Home, 900 N. Court St., Marion. The visitation was from 11:00 a.m. to 1:00 p.m. on Monday, October 14, 2019, at the funeral home. During the time of visitation, a “Reflections of Life” DVD Memorial Tribute featuring special people, places and events in Max’s life was presented to the family and friends. Following the time of visitation the funeral service was at 1:00 p.m. with Pastor Greg Gibbs presiding and assisted by Pastor Kevin Bonifacious. Special comments of memory were made by several of those attending. The prelude and postlude musical selections were presented by pianist, Justin Nehrkorn. Special vocal musical selections presented during the service were, “It Is Well With My Soul”, “Amazing Grace, My Chains Are Gone” and “What A Day That Will Be”, all by Justin Nehrkorn, who accompanied himself on the piano. Interment followed in Lakeview Cemetery of Johnston City, IL. Pallbearers were, Rick Owens, Lenny Bruce, Hob Boyles, Devin Steh, Mike Darter and Rick Land. Military honors were accorded at cemetery by members of Heyde-Pillow V.F.W. Post No. 1301 of Marion, and members of the United States Army Funeral Honors Burial Detail. Following the committal service at the cemetery the family and friends gathered at Heartland Christian Church for a meal and continued time of fellowship and support. For those who preferred, memorial contributions were made to “Heartland Christian Church” and mailed in care of Wilson-McReynolds Funeral Home, 900 N. Court Street, Marion, IL 62959. Memorial envelopes were available at the funeral home. For additional information call the funeral home at 618-993-2131.

Max Overby, age 96, of Marion, IL, passed away peacefully with his family by his side, at 5:05 p.m. on Tuesday, October 8, 2019, in the Heartland Regional Medical Center of Marion. He was born on Sunday, October 7, 1923, in Johnston City, IL,... View Obituary & Service Information

The family of David Max Overby created this Life Tributes page to make it easy to share your memories.

Max Overby, age 96, of Marion, IL, passed away peacefully with...

Send flowers to the Overby family.