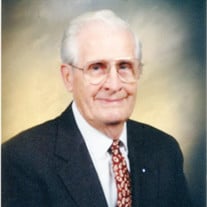 Donald Earl “Don” Henard, age 99, of Clinton, IL, formerly of Marion, IL, passed away peacefully at 10:45 p.m. on Sunday, March 4, 2018 in Liberty Village of Clinton, IL. He was born on Saturday, October 5, 1918, in Vienna, IL the son of Earl and Pearl (Coleman) Henard. Don was united in marriage to Helen Irene Bulliner on Sunday, April 13, 1941, in the First Baptist Church of Herrin, IL. Together they shared over 62 years of marriage until her death on Thursday, May 8, 2003. He answered the call of this nation by serving in the United States Navy during the time of WW II by enlisting in 1943 and serving until the time of his honorable discharge in 1946. Don’s working career was with the Prudential Life Insurance for 32 years until he retired in 1979. He was a dedicated member of the First Baptist Church of Marion for many years where he also served as Deacon and Sunday School Director. He also was a member of the Williamson County Camp Gideon’s and lifetime member of the Marion Noon Lions Club. In his spare time he enjoyed coin and rock collecting. Don loved his family and was proud and always interested in all of the activities. The many times they shared together will now be cherished by those he leaves behind. He is survived by his son and daughter-in-law, David E. and Gail A. Boatright) Henard of Clinton, IL; three granddaughters, Laura Coulman and her husband Jeff of Bluffton, SC, Tessa Volle and her husband Brian of Oreana, IL and Rachel Duey and her husband Bill of Mattoon, IL; grandson, Franklin D. Henard and his wife Emily of Normal, IL; six great granddaughters, MacKenzie Dennis, Paige Dennis, Audrey and Megan Volle and Hannah Seay and Lizzy Henard; two great grandsons, David Volle and Austin Henard; great-great granddaughter, Tensley Brynn Dwyer; sister, Dolores Rolf of Bluffs, IL; sister-in-law, Ruth Henard of Boulder, CO, other extended family and many friends. He was preceded in death by his parents, wife; daughter, Donna Lang; five sisters, Velma Green, Edna Krusa, Helen Greenwalt Poff, June Merris and Essie Hyatt and two brothers, John Williamson and Ralph Henard. Arrangements for Donald E. “Don” Henard were entrusted to Wilson-McReynolds Funeral Home, 900 N. Court Street of Marion. The time of visitation was from 5:00 p.m. until 7:00 p.m. on Friday, March 9th, 2018 at the funeral home. The funeral service was at 11:00 a.m. on Saturday, March 10, 2018, at Wilson-McReynolds Funeral Home with Rev. Dr. Bob Dickerson presiding. The prelude and postlude musical selections were by pianist, Byron Corzine. Special congregational hymns presented during the service were “Blessed Assurance,” “Great is Thy Faithfulness,” and “It Is Well with My Soul” all lead by Rev. Brian Summers who was accompanied by pianist, Byron Corzine. During the service special comments of memory were presented by Don’s son, David. Interment followed next to his wife, Irene, in Hillcrest Cemetery of Carterville, IL. Those serving as pallbearers were John Browning, Mike Troop, Bill Pauls, Frank Henard, Brian Volle, and Bill Duey. Following the graveside committal service at the cemetery, family and friends gathered at the First Baptist Church of Marion for a meal and continued time of fellowship and support. For those who preferred, memorial contributions were made to “Gideon’s International”, to be used for the purchase of bibles, and mailed in care of Wilson-McReynolds Funeral Home, 900 N. Court Street, Marion, IL 62959. Memorial envelopes will be available at the funeral home. For additional information call the funeral home at 618-993-2131.

The family of Donald Earl "Don" Henard created this Life Tributes page to make it easy to share your memories.

Send flowers to the Henard family.