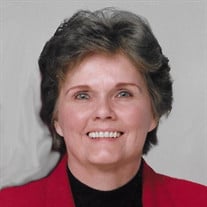 Donna Sue Atkisson, 75, of Marion, IL, passed away peacefully at 6:03 p.m. on Thursday, February 27, 2020, in The Anchor Senior Living Facility of Marion. She was born on Saturday, October 21, 1944, at 7:25 a.m., in Marion, IL, the daughter of William M. Harper and Mary E. (Alexander) Harper. She was united in marriage to Bill Joe Atkisson on Friday, July 8, 1960, in West Frankfort and together they spent 50 years until his death on September 30, 2010. This marriage was blessed with three children. Donna was a homemaker most of her life where she tended to the needs of her home and family. She was a wonderful cook, she made “the best” Apple Pie and Apple Dumplings, which she once won an award for. In the 80’s she owned and operated “Lara Lynn’s Children’s Store.” In 1991, when Dillard’s first opened, she took a sales position and worked there until her retirement in 2008. During her time of employment at Dillard’s, she won a Pacesetter Award for being an outstanding sales associate. She was a very family-oriented person. She loved and supported her children throughout their lives and the love she had for her grandchildren was a special bond that will never be broken. She was fondly known as “Grandma Sugar” by all of her grandchildren. The many memories that have been created, will now be cherished by those she leaves behind. She is survived by her three children, Bill and Kari Atkisson of Manito, IL, Tim and Susan Atkisson of Marion, IL, and Lara and Brad Myers of Collinsville, OK. Her grandchildren, Derek and Ryan Atkisson of Marion, IL, Connor Atkisson of Maryland Heights, MO, Tyler Atkisson of Marion, IL, Brendan Atkisson of Owasso, OK, Colin, Paige and Brooke Myers of Collinsville, OK. Her sister Mary Jo Moore and her husband C.W. Moore of West Paducah, KY, several nieces, nephews, extended family and her very special companion, Robert “Bob” Calhoon, who loved and cared for her until the end. She was preceded in death by her parents, William and Mary Harper, her husband Bill Atkisson, and one brother, Ron Harper. Arrangements have been entrusted to Wilson-McReynolds Funeral Home, 900 N. Court St., Marion. The Celebration of Life will be from 11am until 1pm on Monday, March 2, 2020, at the funeral home. A private Memorial Service and inurnment will be held at a later date. The Atkisson family has requested, memorial contributions be made to “Hospice of Southern Illinois” or “The Alzheimer’s Association” instead of customary gifts of remembrance. Memorial contributions may be mailed in care of Wilson-McReynolds Funeral Home, 900 N. Court Street, Marion, IL 62959. Memorial envelopes will be available at the funeral home. For additional information call the funeral home at 618-993-2131.

The family of Donna Sue Atkisson created this Life Tributes page to make it easy to share your memories.

Send flowers to the Atkisson family.