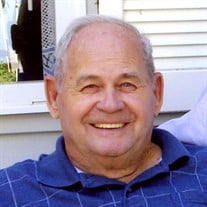 Edward Lee Williams, age 92, of Creal Springs, IL, the Lake of Egypt area, passed away peacefully at 3:50 p.m. on Tuesday, March 10, 2020, in the Community Living Center of the Veterans Medical Center of Marion, IL. Edward was born on Saturday, July 16, 1927, in Springfield, IL, the son of Samuel Calvin and Alma Darlene (Buck) Williams. He was united in marriage to Marcettia Azalea “Sally” Williams on his birthday, Saturday, July 16, 1955, in the Wesley Methodist Church in Mt. Vernon, IL, and together they have shared nearly 65 years of marriage. Ed’s working career began when he was young at Butternut Bakery in Springfield, IL. He worked there for nearly 10 years until it was time for him to embrace his patriotic duty and answer the call of the nation by enlisting into the United States Navy and faithfully served from 1944 until 1953. While serving in the Navy, he was a baker for the crew on-board ships. After his period of faithful service he was honorably discharged with the rank of CSR2 (Commissaryman Petty Officer 2nd Class). When he returned home from serving his country, he started working at King’s Bakery in Mt. Vernon, IL, for a short time. Then in 1955, he began serving as a plumbing apprentice for 5 years. After completing his apprenticeship, he owned and operated Williams Plumbing in Springfield, IL. Then in 1970, he and his family moved to the Lake of Egypt area and he continued his plumbing business between Springfield and southern Illinois for a while until he finally decided just to operate out of southern Illinois. Finally in 1992, he retired due to health reasons. Ed was a member of the Disabled American Veterans, a lifetime member of the Carroll P. Foster VFW Post No. 3455 in Anna IL and the American Legion Post No. 645 in Herrin, IL. In his earlier years, he enjoyed camping and later became a model train enthusiast and loved to fish. He loved his family and enjoyed every chance he got to spend with them and their many activities. The memories that have been created will be cherished by those he leaves behind. He is survived by his wife, Marcettia A. “Sally” Williams of the Lake of Egypt area of Creal Springs, IL; daughter, Marci Becker and her husband, George Smith of Pahrump, NV; son, Jeff R. Williams of the Lake of Egypt area of Creal Springs, IL, several nieces, nephews other extended family and many friends. He was preceded in death by his parents; son, John Edward Williams; brother, Calvin Williams and sister, Frances Bortell. Arrangements have been entrusted to Wilson-McReynolds Funeral Home, 900 N. Court St., Marion. The graveside committal service will be at 1:00 p.m. on Friday, March 13, 2020, in County Line Cemetery south of Creal Springs, IL, with Pastor Steve Watkins presiding. Those wishing to attend the committal service should gather at the cemetery prior to 1:00 p.m. Military honors will be accorded at the cemetery by members of the Heyde-Pillow V.F.W. Post No. 1301 of Marion and the United States Navy Funeral Honors Detail. For those who prefer memorial contributions may be made to "Disabled American Veterans Organization”. Memorial contributions may be mailed to the Wilson-McReynolds Funeral Home, 900 North Court St., Marion, IL 62959. For additional information call the funeral home at 618-993-2131.

Edward Lee Williams, age 92, of Creal Springs, IL, the Lake of Egypt area, passed away peacefully at 3:50 p.m. on Tuesday, March 10, 2020, in the Community Living Center of the Veterans Medical Center of Marion, IL. Edward was born on Saturday,... View Obituary & Service Information

The family of Edward Lee Williams created this Life Tributes page to make it easy to share your memories.

Send flowers to the Williams family.