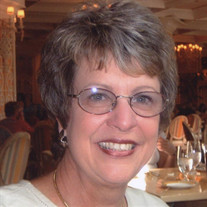 Elaine Hague, age 76, of Maryville, TN, formerly of Marion, IL, passed away peacefully surrounded by her family, at 2:50 p.m. on Tuesday, November 5, 2019, at the home of her daughter, Amanda of Marion. She was born on Friday, April 2, 1943, in Marion, IL the daughter of Edwin Henry John and Marie Anna Margaret (Feurer) Soldner. Elaine attended school in Marion and was a graduate of Marion High School Class of 1961. She continued her education attending at Southern Illinois University of Carbondale, IL where she received her Bachelor of Elementary Education Degree. Elaine was united in marriage to Charles Marlin Hague on Saturday, February 9, 1991, in Downers Grove, IL and together they have shared over 28 years of marriage. She began her long teaching career in Marion and later moved to Western Springs, IL teaching there until her retirement in 1994. She received the honor of being named “Illinois Cooperating Teacher of the Year” of the 1989-90 school year. After her retirement from teaching, she and Charles moved to the Maryville, TN area and she began working again for a Podiatrist for the next 15 years. Elaine was a former member of Zion United Church of Christ of Marion. She was always busy but in her spare time she enjoyed shopping and traveling, especially her yearly trips to Mexico and trips with her “Wildcat Girls”. She loved music and enjoyed singing and playing the piano, and conducting school plays. She also loved designing and decorating her home in Southwestern Décor. Her family was a very big part of her life and was always interested in all of their many activities, especially those of her grandchildren and great grandchildren. The many memories created will now be cherished by those she leaves behind. She is survived by her husband, Charles M. Hague of Maryville, TN; son and daughter-in-law, Matt and Sandy Shotton of West Allis, WI; two daughters and sons-in-law, Amanda and Chris Osborne and Michelle and Keith Neal all of Marion; three step-daughters, Kathy Lubeck and her husband Phil of Westmont, IL, Kim Froats and her husband Tom of Darien, IL and Katie Luna and her husband Tony of Yorkville, IL; step son, Kurt Hague of Downers Grove, IL; 7 grandchildren, Darby Shotton, Sydney Shotton, Delaney Shotton, Brandon Osborne, Blake Osborne, Katie Baltzell and Kellie Baltzell; 12 step grandchildren, Ryan Neal and his wife Emily, Random Neal and his wife Holly, Bradley Lubeck and his wife Katie, Daniel Lubeck, Nicole Bell and her husband CJ, Madeline Lubeck, Zachary Froats, Taylor Froats, Matthew Froats, Payton Froats, Chase Hague and Tyler Hague; 4 step great grandchildren, Ryder Neal, Kamden Neal, Madelynn Neal and Holden Lubeck; sister and brother-in-law, Sharon and Bryan Wilson of Marion, other extended family and many friends. She was preceded in death by her parents; step grandson, Eric Luna; mother-in-law and father-in-law, Josephine and Harold Hague and sister-in-law, Beulah Welch. Arrangements have been entrusted to Wilson-McReynolds Funeral Home, 900 N. Court St., Marion. The visitation will be from 4:00 p.m. to 7:00 p.m. on Friday, November 8th, at the funeral home. The funeral service will be at Wilson-McReynolds Funeral Home at 11:00 a.m. on Saturday, November 9, 2019, with Pastor John Holst presiding. Interment will follow in Rose Hill Cemetery of Marion. The family has requested in lieu of flowers, memorial contributions may be made to “Hospice of Southern Illinois” and mailed in care of Wilson-McReynolds Funeral Home, 900 N. Court Street, Marion, IL 62959. Memorial envelopes will be available at the funeral home. For additional information call the funeral home at 618-993-2131.

Elaine Hague, age 76, of Maryville, TN, formerly of Marion, IL, passed away peacefully surrounded by her family, at 2:50 p.m. on Tuesday, November 5, 2019, at the home of her daughter, Amanda of Marion. She was born on Friday, April 2, 1943,... View Obituary & Service Information

The family of Elaine Hague created this Life Tributes page to make it easy to share your memories.

Send flowers to the Hague family.