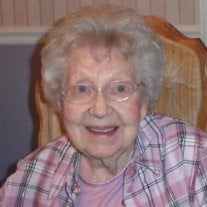 Eva “Hop” Smothers, age 96, of Marion, IL, passed away peacefully with her family by her side at 9:20 a.m. on Tuesday, May 21, 2013 in Marion. She was born on Friday, February 16, 1917, in Marion, IL the daughter of Elmer and Nettie (Davis) Borum. Eva was united in marriage to John Paul “J.P. Speed” Smothers on Thursday, August 1, 1935 in Vienna, IL and they were married over fifty-seven years until his death, December 14, 1992. She was a lifelong member of the First United Methodist Church of Marion, IL and was a life member of the Marion Memorial Hospital Auxiliary. Eva and her husband, owned and operated “Speeds Confectionary and Grey Hound Bus Station and “Club Grey Hound” for the teenagers. Their first location was on the northwest corner of the Marion Public Square and later in the southeast corner in the forties and fifties. Her family was always a very important part of her life, seeing to their needs when they were young and later taking interest in their many activities and those of her grandchildren. She will be remembered as being a loving mother, grandmother and friend. Her memory will be cherished by all who knew and loved her. She is survived by her two daughters, Paula Risner and husband, Tom and Dana Hoffman and husband, Terry all of Marion, IL; one son Pat Smothers of Marion, IL; three grandchildren, Gena Anderson and husband, Tim, Aaron Hoffman and wife, Amber and Angi Albright and husband, Dustin; eight great grandchildren, Austin, Nick and Drew Anderson, Taylor, Hayley and Logan Hoffman, Jaylee Douglas and Easton Albright; seven nephews and spouses, Fred and Mary Ann Stotlar, Dick and Anita Stotlar, Bill and Judy Hopkins, Jerry Houghton, Ron Borum, Bob and Linda Borum and Danny and Theo Cox; other great nieces and nephews; other extended family and many good friends. She was preceded in death by her parents, husband, three sisters, Lucille Hopkins, Louisa Houghton and Helen Stotlar and two brothers, Leon and Bob Borum. Arrangements for Eva “Hop” Smothers have been entrusted to the Wilson-McReynolds Funeral Home, 900 N. Court Street, of Marion, IL. A graveside memorial service will be at 3:00 p.m. on Thursday, May 23, 2013, in Maplewood Cemetery with Pastor Jeffrey Van Dyke presiding. Interment will follow in Maplewood Cemetery of Marion, IL. For those who prefer, memorial contributions may be made to “First United Methodist Church” of Marion. Memorial contribution envelopes will be available the day of the service or may be mailed in care of Wilson-McReynolds Funeral Home, P.O. Box 370, Marion, IL 62959. For additional information please call the funeral home at 618-993-2131.

The family of Eva Smothers created this Life Tributes page to make it easy to share your memories.

Send flowers to the Smothers family.