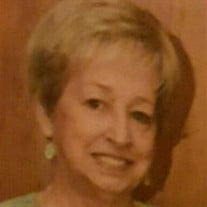 Evelyn R. Litton, age 78, of Marion, IL passed away peacefully surrounded by her family at 7:58 p.m. on Friday, July 29, 2016, in Heartland Regional Medical Center of Marion. She was born on Wednesday, March 9, 1938, in Carbondale, IL, the daughter of Lester L. and Helen B. (Wehmeyer) Stevens. Evelyn attended school in Carbondale and was a graduate of Carbondale High School Class of 1956. She was first united in marriage to Willard E. Mendenhall on Saturday, February 9, 1957 and this union was blessed with 3 children; Shane, Randy and Kim. Together they shared over 31 years of marriage until his death on Tuesday, March 29, 1988. She later was united to William Paul “Bill” Litton on Sunday, February 24, 1991, in Marion and together they have shared 25 years of marriage. Evelyn was a homemaker and found enjoyment in seeing to the needs of her family and managing her home. She was a Christian and of the Baptist faith. In her spare time she enjoyed working Wonderword and jigsaw puzzles. She also enjoyed gardening, working in her yard and flowers and watching her daily soaps on television, “Young and the Restless” and “The Bold and Beautiful”. Earlier in her lifetime she was an avid league bowler. She loved her family and was always interested in all of their activities and enjoyed the many times they all would gather together, especially the holidays. The many memories that were created will now be cherished by those she leaves behind. She is survived by her husband William P. “Bill” Litton of Marion; two daughters and one son-in-law, Kim Lindsey of Herrin, IL and Leslie and Brett Feurer of St. Louis, MO; three sons, Shane A. Mendenhall of Liberty, TN, Randy B. Mendenhall of Watertown, TN and Todd A. Litton of Marion, 9 grandchildren, 14 great grandchildren; twin sister, Shirley Calhoun of Carterville, IL; three brothers and two sisters-in-law, Robert Stevens of Murphysboro, IL, Charles and Joyce Stevens of Carterville, IL and Gary and Debbie Stevens of the Lake of Egypt; two additional sisters-in-law, Janet Stevens of Carterville and Judy Wolf of Herrin; brother-in-law and sister-in-law, Tom and Myrna Litton of Marion other extended family and many friends. She was preceded in death by her parents, first husband, Willard; brother, Ronnie Stevens and brother-in-law, Harold Calhoun. The family would like to especially thank Dr. James O. Alexander, Dr. Alberto D. Cuartas, Dr. Adviteeya A. Dixit, Dr. Earl Rudolph, Dr. Silpa Maddala, the staff of Heartland Regional Medical Center and Hospice of Southern Illinois for the wonderful care given to Evelyn and her family during this special time. Arrangements for Evelyn R. Litton were entrusted to Wilson-McReynolds Funeral Home, 900 N. Court St., Marion, IL. The graveside committal service was at 10:00 a.m. on Tuesday, August 2, 2016, in the Alto Pass Cemetery, located north of Alto Pass on IL State Route 127, with Pastor Brad Harlow presiding. Evelyn’s daughter Kim Lindsey read a special poem “The Limb Has Fallen” and Evelyn’s granddaughter Kasey Mattingley read a special poem “Grandma”. Also during the service the recorded vocal musical selection “I Look to You” by Whitney Houston was presented. Pallbearers were Tyler Surface, T.A. Shotton, Chance Mendenhall, Brett Mendenhall, Dusty Mendenhall, Chris Mendenhall and Dylan Feurer. Interment followed next to her first husband, Willard Mendenhall. Following the committal service the family and friends gathered at the Giant City Lodge for a meal and continued time of fellowship and support. For those who preferred, memorial contributions were made to “Hospice of Southern Illinois” and mailed in care of Wilson-McReynolds Funeral Home, P.O. Box 370, Marion, IL 62959. For additional information please contact the funeral home by calling 618-993-2131.

Evelyn R. Litton, age 78, of Marion, IL passed away peacefully surrounded by her family at 7:58 p.m. on Friday, July 29, 2016, in Heartland Regional Medical Center of Marion. She was born on Wednesday, March 9, 1938, in Carbondale, IL, the daughter... View Obituary & Service Information

The family of Evelyn R. Litton created this Life Tributes page to make it easy to share your memories.

Send flowers to the Litton family.