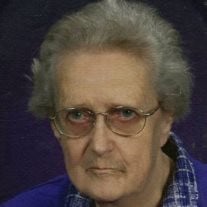 Geneva Threewitt, age 89, of Marion, IL, passed away peacefully with her family by her side at 2:58 p.m. on Saturday, February 8, 2014, in Memorial Hospital of Carbondale, IL. Geneva, was born Monday, February 25, 1924 in Marion, IL the daughter of Lee Roy and Elsie (Rich) Rogers. She was united in marriage to James Edward Threewitt on Thursday, September 26, 1946, in Marion, IL. Together they shared nearly fifty-three years of marriage until his death on Thursday, July 22, 1999. Geneva was a long time member of First Christian Church-Disciples of Christ in Marion, IL and was a member of Veterans of Foreign Wars Heyde-Pillow Post #1301 Ladies Auxiliary of Marion, IL. She was a registered nurse and worked in Union Hospital in West Frankfort for four years, the Veterans Administration Hospital for seven years and she was head of the Obstetrics Department at the Marion Memorial Hospital until her retirement in 1985. In her spare time she loved to play bingo at the VFW and camping all over the place. She always enjoyed her grandchildren and later her great-grandchildren. She is survived by her daughter, Donna Ruth Brown of Goreville, IL; grandchildren, Connie Beth Foster and companion, Dewey Weeks of Christopher, IL, Bobby Allen Brown, of Goreville, IL, Crystal Dawn Brown and fiancé, Chris Martin of Marion, IL, Debra Dawn Futia and husband, Leonard Futia of Goreville, IL; great-grandchildren, Tyler James Weeks, Madisyn Bayleigh Weeks, Kristi Renee Brown, Tristen Allen Brown, Christopher Leonard Futia, Katie Dawn Futia and Noah James Harpstrite; sister, Lorine Abney of Marion, IL; brother and sister-in-law, Charles Lee and Dorothy Rogers of SC, other extended family and many friends. She was preceded in death by her parents; husband, James Threewitt and brother, George Rogers. Arrangements for Geneva Threewitt were entrusted to the Wilson-McReynolds Funeral Home, 900 N. Court Street, Marion, IL. A time of visitation for family and friends was on Tuesday, February 11th from 5:00 p.m. until 7:00 p.m. at the funeral home. During the time of visitation a “Reflection of Life” DVD Memorial Tribute featuring special people, places and events of Geneva’s life was presented to the family and friends. The funeral service was at 11:00 a.m. on Wednesday, February 12, 2014, at Wilson-McReynolds Funeral Home with Rev. Bill Rucker presiding. The prelude and postlude musical selections were recorded piano selections. Special recorded vocal musical selections presented during the service were “Amazing Grace” by Elvis Presley, “Hero” by Mariah Carey, “Tears In Heaven” by Eric Clapton and “Just Be There” by Karen Wheaton. Interment followed in Rose Hill Cemetery of Marion, IL. Pallbearers were Bobby Brown, Chris Martin, Tyler Weeks, John Abney, Robert Brown and Steve Young. After the committal service at the cemetery the family and friends gathered at First Christian Church–Disciples of Christ for a meal and continued time of fellowship and support. For those who preferred, memorial gifts in memory of Geneva Threewitt were made payable to “Wilson-McReynolds Funeral Home” to assist the family. Memorial contribution envelopes were available at the funeral home or were mailed in care of Wilson-McReynolds Funeral Home, P.O. Box 370, Marion, IL 62959. For additional information please contact the funeral home by calling 618-993-2131.

Geneva Threewitt, age 89, of Marion, IL, passed away peacefully with her family by her side at 2:58 p.m. on Saturday, February 8, 2014, in Memorial Hospital of Carbondale, IL. Geneva, was born Monday, February 25, 1924 in Marion, IL the daughter... View Obituary & Service Information

The family of Geneva Threewitt created this Life Tributes page to make it easy to share your memories.

Send flowers to the Threewitt family.