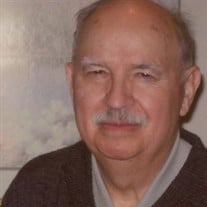 George Michael “Mickey” Oros, age 82, of Marion, IL, formerly of the Pulaski County, IL area, passed away at 2:52 p.m. on Saturday, May 15, 2021, at Deaconess Midtown Hospital in Evansville, IN. He is survived by his wife of 55 years, Frances, his two sons, Nicholas and Carl, and Carl’s wife Kathy, his Aunt Elaine Zefron, and numerous cousins. His parents, and a sister, Diann preceded him in death George was born to George and Lorraine Oros in 1939 in Elgin, Illinois. He grew up in Aurora, IL, and graduated from East Aurora High School in 1957. George received his bachelor’s degree (1961) and his law degree (1965) from the University of Illinois. After passing the bar, George was employed as an Assistant State’s Attorney for Tasewell County, Illinois for a year before moving to Pulaski County, Illinois to run for Circuit Judge in 1966. He served as a Circuit Judge for 36 years, retiring in 2002. George was well known in the legal community as a compassionate and highly ethical judge and individual. He was much respected for his legal knowledge and his dedication to the law. As an attorney and a judge, he was an active member of Moot Court and Inns of Court for many years. Moot Court is an association of judges, lawyers, and law students who volunteer their time in order to give law students practice before the bar by holding mock trials. He was very active in the SIU Law School Moot Court competitions. Inns of Court is an association of lawyers, judges, and other legal professionals who meet regularly to build professional relationships; discuss pressing legal issues of the day; provide mentoring opportunities; and advance the highest levels of integrity, ethics, and civility. He was also a member of the Cairo Illinois Elks Club, the Mounds Illinois VFW, and St. George’s Church in Aurora Illinois for many years. Both he and his wife were long time members of the Southern Illinois Learning in Retirement (SILIR) group based in Carbondale. SILIR is an organization for retired people that provide opportunities to socialize, take classes in a variety of subjects, and travel within the US and around the world. In the fall of 2019, George and his wife traveled to Door County, Wisconsin with SILIR. It was a fun trip, and everyone, including George had a great time. George met his wife, Frances, while a law student at the University of Illinois. They married in the spring of 1966 after she finished her bachelor’s degree. They resided in Pulaski County for 39 years, most of those years in Mounds Illinois where they raised their two sons, Nick and Carl. After Frances retired from teaching at Shawnee Community College, they moved to Marion Illinois in 2005, and have lived there for 16 years. They found it to be an ideal community for retired people with its many restaurants, parks, wineries, and musical events. One of George and Frances’s favorite activities as a couple was ballroom dancing. They took lessons from Jack Lloyd, who taught groups of people in Southern Illinois and Kentucky. They went to dances once or twice a week from the 1970s until last year when most dances were canceled due to Covid restrictions. George and Frances shared a love of books, and spent many hours reading together. They both loved watching movies from the 30s, 40s, and 50s, and spent many an evening watching American Movie Classics on television. After retiring they both liked to travel, and visit relatives and friends. George will be remembered most for his humor, kindness, and intellect. He would always have a joke or funny story to tell, often at his own expense. Most people were impressed with his warmth and friendliness when meeting him for the first time. His family and friends will remember him as a man with a big smile, who was always happy to see them. He will be greatly missed by all who knew him, but especially by his wife and sons. Arrangements have been entrusted to Wilson-McReynolds Funeral Home, 900 North Court Street, Marion, IL. The visitation will be on Thursday, May 20, 2021, from 5:00 p.m. to 7:00 p.m. at the funeral home. The family requests for those who prefer, memorial contributions be made to “The National Kidney Foundation.” Memorial contributions may be mailed in care of Wilson-McReynolds Funeral Home, 900 N. Court Street, Marion, IL, 62959. Memorial envelopes will be available at the funeral home. For additional information please call the funeral home at 618-993-2131.

The family of George Michael "Mickey" Oros created this Life Tributes page to make it easy to share your memories.