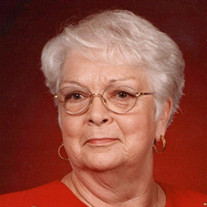 H. Lorene Moore, age 86, of Marion, IL, passed away peacefully at 3:08 p.m. on Tuesday, June 4, 2019, in “The Anchor” of Voyage Senior Living of Marion. She was born on Wednesday, May 24, 1933, in Southern Township of Williamson County, IL, the daughter of Newsome and Lena (Pritchett) Hudgens. Lorene was united in marriage to Charles Monroe Moore on Friday, January 29, 1954, in Marion and together they have shared over 65 years of marriage. Her working career was as a Bus Aid and Bus Driver for Special Education of Marion Unit No. 2 School District. Lorene was a member of Second Baptist Church of Marion for many years. In her spare time she enjoyed gardening, managing her home and seeing to the needs of her family. She enjoyed the many times they all would be together and was always interested in all of their many activities. Now those she leaves behind will cherish the many memories that have been created. She is survived by her husband, Charles M. Moore of Marion; daughter and son-in-law, Linda L. and Gordon Fowler of Marion; son and daughter-in-law, Charles “Randy” and Tammy Moore of Spokane Valley, WA; four grandchildren, Amanda Fowler-Test and husband Todd of Goreville, IL, Randi Lynn Jensen and husband Will of Lake Stevens, WA, Kristen Moore of Davis, CA and Justin Moore and wife Taylor of Richmond, UT; four great grandchildren, Madilyn, Owen, Elliott and Henry Jensen all of Lake Stevens, WA; sister, Elma “Jean” Gentry of Mt. Vernon, IL, other extended family and many friends. She was preceded in death by her parents; sister, Dorothy Dean Hudgens and two brothers, Eugene and Robert Hudgens. Arrangements were entrusted to Wilson-McReynolds Funeral Home, 900 N. Court St., Marion. The visitation was from 9:30 a.m. until 11:00 a.m. on Friday, July 5, 2019, at the funeral home. Following the time of visitation the funeral service was at 11:00 a.m. with Rev. Danny Ward presiding. The prelude and postlude recorded vocal musical selections were a medley of special selections chosen by the family. Special recorded musical selections presented during the service were “When I’m Gone” by Joey & Rory, “How Great Thou Art” by Home Free and “Amazing Grace” by Pipers of the World. Also presented during the service was a video selection “The Most Beautiful Amazing Grace I’ve Ever Seen” by Gloria Franchi. Interment followed at 1:00 p.m. in Mound City National Cemetery of Mound City, IL. Pallbearers were Gordon Fowler, Todd Test, Justin Moore, Mark Dallis, Ralph Graham and Randy Moore. Following the committal service at the cemetery the family and friends returned to Marion, and continued their time of fellowship and support with a meal at Bennie’s Italian Restaurant. In lieu of flowers the family requested, memorial contributions to “The Alzheimer’s Association” and mailed in care of Wilson-McReynolds Funeral Home, 900 N. Court Street, Marion, IL 62959. Memorial envelopes were available at the funeral home. For additional information call the funeral home at 618-993-2131.

The family of H. Lorene Moore created this Life Tributes page to make it easy to share your memories.

Send flowers to the Moore family.