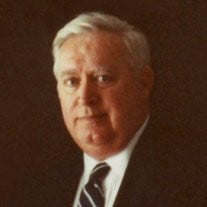 Harry Bracy Melvin, age 77, of Marion, IL passed away at 2:38 p.m. Wednesday, October 9, 2013 in Heartland Regional Medical Center in Marion, IL. He was born, January 3, 1933, in Carbondale, IL the son of Arthur F. and Virginia (Bracy) Melvin. Harry was united in marriage to Guiola S. Smith on February 28, 1955, in Marion and together they shared over fifty-four years of marriage until her death on April 5, 2009. Harry will be missed by all who knew and loved him. He is survived by two sons, Harry B. Melvin II and James B. Melvin both of Marion, IL; granddaughter, Melissa Melvin of Marion, IL; grandson, James B. Melvin II of Marion, IL, eight great-grandchildren; brother, Jasper Melvin of Houston, TX, other extended family members and many friends. He was preceded in death by his parents; wife; sister, Shirley Cox and his grandparents, Harry W. Bracy and Maude Bracy. The arrangements for Harry Bracy Melvin were entrusted to the Wilson-McReynolds Funeral Home, 900 N. Court Street, of Marion, IL. The time of visitation was from 12:30 p.m. until 2:30 p.m. on Monday, October 14, 2013, at Wilson-McReynolds Funeral Home in Marion. Following the time of visitation the graveside service and interment was at 2:45 p.m. with Rev. Rick Pierce officiating in Rose Hill Cemetery of Marion, IL. Pallbearers were Brett Melvin, Kelly Nuckols, Todd Russell, Don Musser, Bill Buckaway and Terry Black. For additional information please call the funeral home at 618-993-2131.

The family of Harry Bracy Melvin created this Life Tributes page to make it easy to share your memories.

Send flowers to the Melvin family.