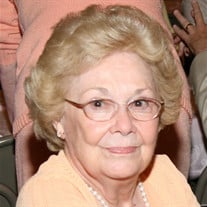 Helen M. Keller, age 93, of Marion, IL passed away peacefully at 11:00 a.m. Friday, January 26, 2018, at home, with her family by her side. Helen was born on Friday, June 13, 1924, in Marion, IL, the daughter of Virgil W. and Gladys (Butts) Bowman. She grew up in Marion and after moving to St. Louis, MO, she graduated from high school and attended Lindenwood College. She later was a secretary for the McDonald Douglas Cooperation in St. Louis. After returning to Marion, she was employed by Bowman Tire Mart and later, by Distinctive Interiors. In her spare time her hobby was reading. Her family was always very important to her, and she was always interested in their many activities and the times they enjoyed together. The memories they created will now be cherished by those she leaves behind. Helen is survived by her daughter and son-in-law, Lynn and Bob Henderson of Marion; sister and brother-in-law, Pam and Dr. Jim Eaton of Kennesaw, GA; brother, Jack Bowman of Marion; one granddaughter, Patricia Moake and husband Ed of Marion; one grandson, Scott Henderson and wife Michelle of Savoy, IL; four great grandchildren, Jennifer Head of Shawneetown, IL, Sarah Moake of Johnston City, IL, Taylor Henderson, and Ryan Henderson both of Savoy, IL; two great great-grandchildren, Amaya Peairs and Asher Pierce; several nieces, nephews, other extended family members, and many friends. She was preceded in death by her parents; sister, Ruth Rodd and brother, Dick Mills. Arrangements for Helen M. Keller were entrusted to Wilson-McReynolds Funeral Home, 900 N. Court St., Marion. The visitation was from 1:00 p.m. until 2:00 p.m. on Wednesday, February 7, 2018, at the funeral home. Following the time of visitation the memorial service was at 2:00 p.m. with Rev. Dr. Bob Dickerson presiding. The prelude and postlude musical selections were recorded piano pieces. Special recorded vocal musical selection presented during the service was “Peace in the Valley” by Elvis. Interment followed in Maplewood Cemetery in Marion, IL. For those who preferred, memorial contributions were made to, “Hospice of Southern Illinois” and mailed in care of Wilson-McReynolds Funeral Home, 900 N. Court Street, Marion, IL 62959. Memorial envelopes were available at the funeral home. For additional information call the funeral home at 618-993-2131.

The family of Helen M. Keller created this Life Tributes page to make it easy to share your memories.

Send flowers to the Keller family.