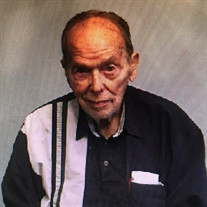 James W. Benton, age 96, of Marion, IL, passed away peacefully at 1:15 p.m. on Sunday, October 21, 2018, at Carrier Mills Nursing and Rehabilitation Center of Carrier Mills, IL. He was born on Wednesday, February 1, 1922, in Marion, the son of James Harrison and Mary Alice (Bean) Benton. James was a graduate of Johnston City, IL High School Class of 1940. After graduation he continued his education by attending Southern Illinois University of Carbondale, IL where he received a Bachelor of Education degree. Later he attended Moody Bible Institute in Chicago, IL and received a degree in Divinity. He was united in marriage to Mary Evelyn Zoeller on Tuesday, November 26, 1946, in Johnston City, IL and together they shared over 67 years of marriage until her death on Tuesday, September 2, 2014. He began his long teaching career in the elementary grades in Eldorado, Equality and West Frankfort, IL schools. He retired from teaching in West Frankfort around 1984, but continued substitute teaching for many more years mainly in the Marion, IL School System. He also has served as a Southern Baptist Minister for many churches of the area including Ina Baptist, Third Baptist, East Fork Baptist and Caldwell Baptist all of the West Frankfort area, Horse Prairie Baptist of Sesser and Ridgway Baptist. He has been a member of the First Baptist Church of Marion for many years. In his spare time he enjoyed traveling, golfing, reading and was a Civil War enthusiast. He enjoyed visiting with people, especially all of his former students he would run into and has influenced many people during his lifetime. The many memories that have been created will now be cherished by those he leaves behind. He is survived by his daughter and son-in-law, Robyn and Kerry Stiman of Murfreesboro, TN; two sons and daughter-in-law, Jim Ross and Cathy Benton of Chaska, MN and John Wade Benton of Carbondale; five grandchildren, Sasha Greene and her husband Shea of Saginaw, TX, Kristen Williams and her husband Steven of Marion, Joshua Kerry Stiman of Murfreesboro, TN, Mark Aaron Benton and his wife Keri of Hammond, WI and Meredith Heine of Young America, MN, ten great grandchildren; two brothers-in-law, Dan Zoeller and his wife Carolyn of Louisville, KY and Bob Zoeller and his wife Linda of Marion; four sisters-in-law, Jeanette Bowman and her husband Ron of Marion, Carole Nicholson and her husband Nick of Phoenix, AZ, Kay Holderfield and husband Jack of Marion and Wanda Benton of Johnston City, IL; nephew, Tom Benton of Johnston City, IL; two nieces, Mona Benton of Marion and Jeanine Benton of Marion, other extended family and many friends. He was preceded in death by his parents, wife and brother, Ray Benton. Arrangements were entrusted to Wilson-McReynolds Funeral Home, 900 North Court Street, Marion, IL. The time of visitation was from 1:00 p.m. to 2:00 p.m. on Sunday, October 28, 2018, at the funeral home. Following the time of visitation the funeral service was at 2:00 p.m. with Dr. Bob Dickerson presiding. The prelude and postlude musical selections were presented by pianist Lori Creamer. Special vocal musical selections presented during the service were “Amazing Grace” and “When We All Get to Heaven” both by Lori Creamer who accompanied herself on the piano. Interment was next to his wife Mary, in Rose Hill Cemetery of Marion, IL. For those who preferred, memorial contributions were made to “First Baptist Church” and mailed in care of Wilson-McReynolds Funeral Home, 900 N. Court Street, Marion, IL 62959. Memorial envelopes were available at the funeral home. For more information please call the funeral home at 618-993-2131.

James W. Benton, age 96, of Marion, IL, passed away peacefully at 1:15 p.m. on Sunday, October 21, 2018, at Carrier Mills Nursing and Rehabilitation Center of Carrier Mills, IL. He was born on Wednesday, February 1, 1922, in Marion, the son... View Obituary & Service Information

The family of James William Benton created this Life Tributes page to make it easy to share your memories.

Send flowers to the Benton family.