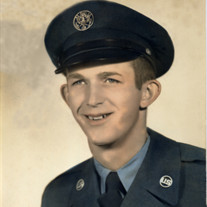 James H. “Ears” Cagle, age 82, of Marion, IL, passed away peacefully at 4:44 a.m. on Saturday, April 26, 2014, at his home. He was born on Monday, August 17, 1931, in Marion, IL the son of James Terry and Marguerite Louise (Norman) Cagle. James attended school in Marion and was a graduate of Marion High School in 1950. He answered the call of the nation by enlisting into the United States Air Force in January of 1951, during the time of the Korean War being stationed for a period of time on the island of Okinawa. He served faithfully for 4 years and was discharged in 1955 with the rank of Airman First Class. He then served in the United States Army until he was discharged in September of 1960 with the rank of Sergeant. James was united in marriage to Harriet Joan “Goldie” Cook on Friday, October 27, 1951, in Biloxi, MS and together they enjoyed sixty-one years of marriage until her death on Sunday, Nov. 11, 2012. His working career was with Ameren for 30 years as a lineman and later managing their substations until his retirement in 1991. James was a member of Zion United Church of Christ in Marion, IL. He also was a lifetime member of Marion VFW Heyde-Pillow Post No. 1301, American Legion Post No. 147 of Marion and was a former member of IBEW Local No. 702. A very important part of his life was the Marion VFW Post having served as Post Commander and in many other positions of the post. He also was involved on the funeral honors ritual team and was actively involved in the construction of the new post building. In his spare time he enjoyed watching golf and basketball, working in his rose garden, woodworking and quail hunting in his younger years. He is survived by his daughter, Beth Cagle of Marion, IL; granddaughter, Jamie Allen and her husband, Chris of Marion, IL; two great grandchildren, Kendal Cowper and Olivia Allen both of Marion, IL; beloved aunt, Mary Overbey of Marion, IL; sister-in-law, Judy Cagle and her family of Peoria, IL, other extended family and many friends. He was preceded in death by his parents, wife; brother, Fred Cagle and infant sister, Phyllis Jean Cagle. Arrangements for James H. Cagle were entrusted to the Wilson-McReynolds Funeral Home, 900 N. Court Street, Marion, IL. A time of visitation for family and friends was on Friday, May 2nd from 5:00 p.m. until 7:00 p.m. at the funeral home. The funeral service was at 11:00 a.m. on Saturday, May 3, 2014, at Wilson-McReynolds Funeral Home with Rev. Orrin Johnson presiding. The service began with a military walk thru by members of the V.F.W. Heyde-Pillow Post No. 1301 with Commander Larry Largent beginning the service by presenting personal comments of memory about James. Other comments of memory were presented by James’s great grandson, Kendal Cowper. The prelude and postlude musical selections were recorded piano selections. Special recorded vocal selection presented during the service was “In the Garden” by Elvis Presley. Those serving as pallbearers at the funeral home were; Chris Allen, Greg Kessel, Kendal Cowper and Todd Russell. Interment followed in Rose Hill Cemetery of Marion, IL. Members of Heyde-Pillow V.F.W. Post No. 1301 serving as pallbearers at the cemetery were; Don Burgrabe, Ralph DeVasier, Dan Fruge, Wayne O’Connor, Bill Rice and Ron Russell. Military honors were accorded at the graveside by members of Heyde-Pillow V.F.W. Post No. 1301, American Legion Post No. 147 and Illinois National Guard Flag Detail all of Marion, IL. Those participating were Commander, Larry Largent; Chaplain. Dan Fruge; Officer of the Day, Pat Campbell; Bugler, Jim Grieme; Color Guard, Jessie James and Bill Rice; National Colors, Ernie Rinella; American Legion Colors, Ralph DeVasier; POW Colors, Bob Casey; Presentation of the VFW Bible to the family, Wayne O’Connor and firing squad, Don Burgrabe, Bill Hampsey, Bill Hatfield, Fred Read, Bill Reynolds, Ron Russell and Jerry Swisher. Members of the Illinois National Guard Flag Detail participating in the folding of the flag were Staff Sergeant Brandon Page and Sergeant David Kemner with the musical selection “America the Beautiful” playing in the background.. Staff Sergeant Brandon Page presented the folded flag to James’ daughter, Beth. Following the service at the cemetery the family gathered at James’ granddaughters; Jamie Allen, for a meal and continued time of fellowship and support. For those who preferred, memorial gifts in memory of James H. Cagle were made to either “Marion VFW Post No. 1301” or “Hospice of Southern Illinois”. Memorial contribution envelopes were available at the funeral home or were mailed in care of Wilson-McReynolds Funeral Home, P.O. Box 370, Marion, IL 62959. For additional information please contact the funeral home by calling the funeral home at 618-993-2131.

The family of James H. "Ears" Cagle created this Life Tributes page to make it easy to share your memories.