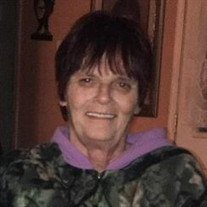 Janice M. Horsley, age 67, of Marion, IL, passed away at 7:29 a.m. on Tuesday, April 9, 2019, at her home. She was born on Monday, June 18, 1951, in Anna, IL, the daughter of Barney and Mae Elizabeth (Boyer) Simmerman. Janice was united in marriage to Charles Lee Horsley, on Monday, January 9, 1978, in Marion, and together they shared over 27 years of marriage until his death on Saturday, January 15, 2005. Her working career was with Herrin Hospital for 34 years as a Certified Nursing Assistant. Janice was of the Baptist faith. In her spare time she enjoyed listening to music, going to New Orleans, LA with her friends, and spending time with her grandchildren and dog Flash. She loved her family and enjoyed the many times they shared together. The many memories that have been created will now be cherished by those she leaves behind. She is survived by her mother, Mae E. Simmerman of Marion; three sons, Ryan M. Horsley of Marion, Shane Simmerman of Creal Springs, IL and Bronson Simmerman of Marion, five grandchildren, three great grandchildren; brother and sister-in-law, B.J. and Kelly Simmerman of Marion; two sisters and brothers-in-law, Kay and Lindell Hickey and Tammy and Robert Walters all of Marion, other extended family and many friends. She was preceded in death by her father, husband and sister Patsy Martin. Arrangements have been entrusted to Wilson-McReynolds Funeral Home, 900 N. Court St., Marion. According to her wishes, there will not be any public services accorded at this time. Interment will follow next to her husband in Rose Hill Cemetery of Marion, IL. For those who prefer memorial contributions may be made to either or both “Hospice of Southern Illinois” and/or “American Cancer Society” and mailed in care of Wilson-McReynolds Funeral Home, 900 N. Court Street, Marion, IL 62959. Memorial envelopes will also be available at the funeral home. For more information call the funeral home at 618-993-2131.

The family of Janice Marie Horsley created this Life Tributes page to make it easy to share your memories.

Send flowers to the Horsley family.