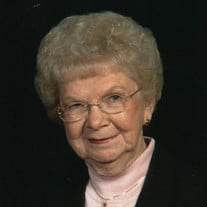 Janie L. Booth, age 85, of Marion, IL, passed away peacefully at 10:59 p.m. on Thursday, January 29, 2015, in Heartland Regional Medical Center of Marion, IL. She was born south of Marion, IL on Thursday, January 16, 1930, the daughter of Claude and Libby (King) Pritchett. She was one of 11 children. Janie attended school in Marion and was a graduate of Marion High School Class of 1948. She was united in marriage to Paul Howard “Chick” Booth on April 16, 1949, in Aldersgate United Methodist Church, located on South Market Street, in Marion, IL. Together they shared over fifty-nine years of marriage until his death on May 8, 2008. She was a long time member of Aldersgate United Methodist Church of Marion, IL. She had belonged to the Marion chapter of White Shrine of Jerusalem, the Republican Women’s Organization, and had been involved with various Shrine activities with Paul. Her working career was with the Williamson County Treasurer’s Office for many years until her retirement in 2000. Prior to that she worked at Montgomery Ward in Marion. In her spare time she enjoyed traveling, reading, spending time with her family. She loved to bake pies and cookies and especially going to St. Louis to see the Cardinals play. Her family was a very important part of her life and the many memories that have been created will now be cherished by those left behind. She is survived by her daughter and son-in-law, Mary Jane and Randy Lewis of Crown Point, IN; three grandchildren, Jody Faye Trombley and husband, Brian of Chicago, IL, Elizabeth Jo Riffert and husband, Charles of Newburgh, IN and Jonathan Lewis of Chicago, IL; great grandson, James Paul Riffert, sister; Joan Hock of Energy, IL; two brothers and sisters-in-law, Carl Ray Pritchett, and his wife, Margaret, of Marion, IL and Jerry Pritchett and his wife, Diane, of Marion, IL; daughter-in-law, Darlene Adams of Marion, IL, several nieces, nephews, other extended family and many friends. She was preceded in death by her parents; husband, Paul Howard “Chick” Booth on May, 8, 2008; son, James Howard “Jim” Booth on October 12, 2008, and several brothers and sisters. Arrangements for Janie L. Booth were entrusted to Wilson-McReynolds Funeral Home, 900 N. Court St., Marion, IL. The time of the visitation for family and friends was from 3:00 p.m. to 6:00 p.m. on Thursday, February 5, 2015, at the funeral home. Following the time of visitation the memorial service was at 6:00 p.m. with Rev. Dr. Tim Ozment presiding. The prelude and postlude musical selections were presented by pianist, Sharon Disney. Special vocal musical selection presented were “The Old Rugged Cross”, “How Great Thou Art” and “Amazing Grace” all by vocalist, Gary Dooley with pianist, Sharon Disney accompanying. Interment followed at a later date in Maplewood Cemetery of Marion, IL. For those who preferred, memorial contributions were made to either “Aldersgate United Methodist Church”, “Hospice of Southern Illinois” or “Shriners’ Hospital for Children” and mailed in care of Wilson-McReynolds Funeral Home, P.O. Box 370, Marion, IL 62959. Memorial envelopes were available at the funeral home. For additional information please contact the funeral home by calling 618-993-2131.

The family of Janie Lou Booth created this Life Tributes page to make it easy to share your memories.

Send flowers to the Booth family.