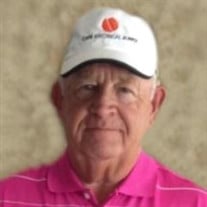 John D. Browning, age 73, of Marion, IL, passed away peacefully at 10:45 p.m. on Friday, May 7, 2021, in Evelyn’s House, a part of Barnes-Jewish Hospital of St. Louis, MO. He was born on Wednesday, January 14, 1948, in Murphysboro, IL, the son of Oral Larue and Norine (Jack) Browning. John attended school in Marion, and was a graduate of Marion High School Class of 1966. He continued his education attending at Southern Illinois University and Southeastern Illinois College and received an Associate Degree in Business. He then started as an Electrical Apprentice working out of the IBEW Local Union No. 702 Hall in West Frankfort for several years. He later worked for Bruce Electric of Marion, and in 1979, bought the business and owned and operated it for the next 31 years until he retired in 2010. John was united in marriage to Pamela Sue Kelley on Friday, August 18, 1967, in Scottsboro Baptist Church of Marion, and together they have shared nearly 55 years of marriage. He loved his church and was a member of Second Baptist Church in Marion, IL. John enjoyed teaching Sunday school and mentoring young adults in their walk with the Lord. He was a retired member of IBEW Local Union No. 702 of West Frankfort. Earlier in his life he was an avid outdoorsman and enjoyed fishing and hunting. He also umpired and coached baseball for the Marion Recreational League for many years. Later in life he became an avid golfer and enjoyed playing the many courses of the area. Though he always was busy with work and outside interests, his family was a very important part of his life, especially his grandchildren. He was always interested in hearing about all of their many activities. He enjoyed and always looked forward to the many times the family would be together. The many memories created will now be cherished by those he leaves behind. He is survived by his wife, Pam S. Browning of Marion; two sons, Jason Browning and his wife, Bridget of Paducah, KY and John Browning and his wife, Leah of Marion; daughter, Jamie Adams of Marion; six grandchildren, JoAnna Harper and her husband, Jake of Paducah, KY, Logan Browning of Paducah, KY and Hannah Browning, Zechariah Browning, Addison Adams and Annaleice Adams all of Marion; two sisters, Judy Chamness and her husband, Ron of Marion and Sandra Cavitt and her husband, Jerry of Marion; brother, Butch Browning and his wife, Debbie of Makanda, IL; sister-in-law, Sharon Fuller of Evansville, IN, other extended family and many friends. He was preceded in death by his parents; granddaughter, Abbie Danielle Adams on March 28, 2009, and his father-in-law and mother-in-law, Roy and Geraldine Kelley. Arrangements have been entrusted to Wilson-McReynolds Funeral Home, 900 North Court Street, Marion, IL. The visitation will be on Tuesday, May 11th, from 5 p.m. to 8 p.m. at the funeral home. The funeral service will be on Wednesday, May 12, 2021, at 11 a.m. at Wilson-McReynolds Funeral Home with the Dr. Jason Browning presiding. Interment will follow in Rose Hill Cemetery of Marion, IL, with Rev. John Howard presiding. The family requests for those who prefer, memorial contributions be given to “St. Louis Children’s Hospital.” Memorial contributions may be mailed in care of Wilson-McReynolds Funeral Home, 900 N. Court Street, Marion, IL, 62959. Memorial envelopes will be available at the funeral home. For additional information call the funeral home at 618-993-2131. DUE TO HEALTH CONCERNS RELATED TO THE COVID-19 VIRUS AND BY THE SIGNING OF EXECUTIVE ORDER BY THE ILLINOIS GOVERNOR, if you are planning on attending the visitation or funeral service it is required you wear a mask and social distance yourself from others.

The family of John D. Browning created this Life Tributes page to make it easy to share your memories.

Send flowers to the Browning family.