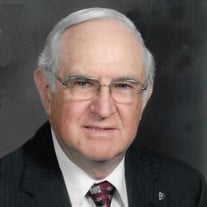 John E. Hartkopf, age 82, of Marion, IL entered the presence of the Lord on January 17, 2020, with his family by his side at Heartland Regional Medical Center. John was known for being devoted to his family, loving his church family, and being a servant of God. He was born on Thursday, August 26, 1937, at home in rural Marion near White Ash, the son of John and Ruth (Cash) Hartkopf. John grew up in rural Williamson County and was a graduate of Johnston City High School Class of 1955. He was united in marriage to Elizabeth Ann (Webb) Lingle on November 1, 1980, and together they shared over thirty-nine years of marriage. For many years, John was employed with Southern Illinois Wholesale before going to work for Inland Steel Coal Company. He was a member of the United Mine Workers of America and retired in 1999, from Consolidated Coal Company in Sesser, Illinois. He attended Heartland Christian Church, where he faithfully served as an Elder for many years. The many memories shared with his family and friends will be cherished by those who knew and loved him, especially those in his coffee group at McDonald's. He is survived by his wife, Elizabeth A. Hartkopf of Marion; two daughters, Frances Cave and husband, Jerry of Marion; Sandra Shibles and husband, Bruce of Longmont, CO; two sons, David Lingle and wife, Regina of Lexington, IL; and Jonathan Lingle and wife, Billie of Murfreesboro, TN; three grandchildren whom he lovingly raised as his own children, Ron Lang and wife, Tracy of Marion, Cayenne Haseker and husband, Mike of Marion, Kara Moreland and husband, Alton of St. Charles, MO; several other grandchildren and great-grandchildren; sister, Mary Jean Overby of Marion; brother-in-law Larry Webb and wife Sue of Marion; several step-brothers and step-sisters; two nieces, Shirley Hartkopf and Ann Henke, and a nephew, Mickey Hartkopf and wife, Jackie all living in Michigan; and nephew David Overby of Phoenix, AZ. He was preceded in death by his parents; son, John David Hartkopf; sister, Dorothy Clark; and brother, Jack Hartkopf. Arrangements were entrusted to Wilson-McReynolds Funeral Home in Marion. The visitation was from 4:00 p.m. until 7:00 p.m. on Tuesday, January 21, 2020, at Heartland Christian Church located at 900 East Boyton St. in Marion. Visitation resumed at 11:00 a.m. until 1:00 p.m. on Wednesday, January 22, 2020, at the church. During the time of visitation a “Reflection of Life” DVD Memorial Tribute featuring special people, places and events in John’s life was presented to the family and friends. Following Wednesday's visitation, the funeral service was at 1:00 p.m. with Pastor Greg Gibbs and Pastor Kevin Bonifacious presiding. The prelude and postlude musical selections were presented by pianist Justin Nehrkorn. Special vocal musical selections presented during the service were “Who You Say I Am” by Justin Nehrkorn accompanying himself on the piano and Kevin Gibbs and Kevin Bonifacious accompanying on the guitar, “Midnight Cry” by Justin Nehrkorn, “It Is Well With My Soul” by Justin Nehrkorn with Jonathan Lingle accompanying on the piano and “Amazing Grace (My Chains are Gone)” by Justin Nehrkorn accompanied on the piano by Jonathan Lingle and Kevin Gibbs and Kevin Bonifacious both playing guitar. Those attending the service were offered to participate in the sacrament of “Holy Communion” during the service. Interment followed in Rose Hill Cemetery of Marion. Pallbearers were Ted Lingle, Chad Winters, Patrick Winters, Joshua Lingle, Mike Haseker and Alton Moreland. Following the committal service at the cemetery the family and friends gathered back at Heartland Christian Church for a meal and continued time of fellowship. Memorial contributions were made to "Heartland Christian Church”. For additional information please call the funeral home at 618-993-2131.

John E. Hartkopf, age 82, of Marion, IL entered the presence of the Lord on January 17, 2020, with his family by his side at Heartland Regional Medical Center. John was known for being devoted to his family, loving his church family, and being... View Obituary & Service Information

The family of John E. Hartkopf created this Life Tributes page to make it easy to share your memories.

Send flowers to the Hartkopf family.