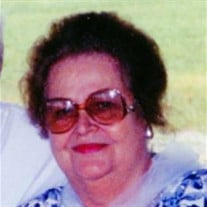 Juanita Daisy Calvert, age 84, of Marion, IL, passed away peacefully with her family by her side at 10:40 p.m. on Friday, February 17, 2017, at Integrity Health Care Center in Marion. She was born in Cypress, IL on Friday, November 18, 1932, the daughter of Claude Earl Howard Neeley and Evelyn S. (Moake) Neeley. Juanita grew up and attended school in Cypress, IL. She was united in marriage to Charles Ray Calvert on Saturday, September 8, 1951, in Pocahontas, AR and together they shared over 57 years of marriage until his death on May 11, 2009. She was a member of Grange Hall Free Will Baptist Church located south of Marion, where she attended for many years. In addition to caring for her family and home she was employed for many years by Sangamon Electric and Tom’s B-B-Q in Marion. She loved her family and was always interested in all of their activities. The many memories that have been created will now be cherished by her family and many friends. She is survived by her five daughters and four sons-in-law, Sherry Ann and Rodney Williams of Johnston City, IL, Cynthia Jane and Harry McKinney Sr., of Johnston City, IL, Sally R. and Lavern Dunham of Marion, IL, Cathy L. Calvert of Creal Springs, IL, Judy Charlene and Robert Griebe of Marion, IL; two sons and daughters-in-law, Danny Ray and Sherri Calvert of Marion, IL and Scott Lee and Treasa Calvert of Creal Springs, IL; eight grandsons; twelve granddaughters and numerous great grandchildren, other extended family and many friends. She was preceded in death by her husband; parents; infant son, Johnny Calvert on May 17, 1953; two granddaughters, Sarah Stewart and Lori Stewart and one great-grandson, Tyler Savant. Arrangements for Juanita D. Calvert were entrusted to Wilson-McReynolds Funeral Home, 900 N. Court St., Marion. The visitation was from 10:00 a.m. until 11:00 a.m. on Tuesday, February 21, 2017, at the funeral home. Following the time of visitation the funeral service was at 11:00 a.m. at the funeral home with Pastor Kevin McNeely presiding. The prelude and postlude musical selections were recorded piano selections. Special recorded vocal musical selections presented during the service were “Peace In the Valley” and “How Great Thou Art” both by Elvis Presley. Interment followed in Spring Grove Cemetery near Carrier Mills, IL in Williamson County. At the graveside Elijah Burnett presented “Amazing Grace” as a special vocal musical selection. Pallbearers were Ritchie Stewart, David Durham, Jamie Calvert, Steven Dunham, Stacey Calvert and Harry McKinney. Following the committal service at the cemetery the family and friends gathered at Spillertown Baptist Church for a meal and continued time of fellowship and support. For those who preferred, memorial contributions were made to; “Wilson-McReynolds Funeral Home” to assist in final expenses and mailed in care of Wilson-McReynolds Funeral Home, 900 N. Court Street, Marion, IL 62959. Memorial envelopes were available at the funeral home. For additional information please contact the funeral home by calling 618-993-2131.

Juanita Daisy Calvert, age 84, of Marion, IL, passed away peacefully with her family by her side at 10:40 p.m. on Friday, February 17, 2017, at Integrity Health Care Center in Marion. She was born in Cypress, IL on Friday, November 18, 1932,... View Obituary & Service Information

The family of Juanita Daisy Calvert created this Life Tributes page to make it easy to share your memories.

Send flowers to the Calvert family.