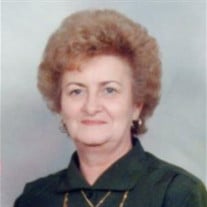 Judith A. “Judy” Wolf, age 75, of Marion, IL, formerly of Herrin, IL, passed away peacefully at 11:15 p.m. on Monday, February 27, 2017, at her home. She was born in Marion on Thursday, March 27, 1941, the daughter of Paul and Norine (Shotton) Litton. Judy attended school in Marion and was a graduate of Marion High School Class of 1959. She was first united in marriage to Clifton D. Null in May of 1960. She later was united in marriage to Samuel E. “Sam” Wolf on Saturday, May 28, 1983, in Marion and together they shared over 28 years of marriage until his death on Monday, August 8, 2011. Judy’s working career was with the Marion Carnegie Library as a Library Assistant for almost 30 years until her retirement in 2015. She was of the Methodist faith. Judy loved animals especially her two dogs Cubby and Precious. She loved her family and enjoyed the many gatherings they shared together. The memories that have been created will now be cherished by those she leaves behind. She is survived by her son, Paul C. Null and his fiancé Jo Short of Marion; daughter, Yolanda Jo Null of Herrin; four grandchildren, Ericka Moulton and husband Matt Mueller, Chelsea Obptande and husband Daryl, Dylan Null and Justin Null; three great grandchildren, Dakota Null, Darren Mueller and Haley Mueller; two brothers and sister-in-law, Tom and Myrna Litton and Bill Litton all of Marion; sister-in-law, Alice Murphy and husband Ted of Murphysboro, IL; five nieces, Mary Barringer, Phyllis Byrd, Barbara Robinson, Leslie Feurer and Bridgett English; nephew Todd Litton, other extended family and many friends. She was preceded in death by her parents; husband, Sam Wolf; daughter, Sherry Moulton; nephew, Timothy Evans and sister-in-law, Evelyn Litton. Arrangements for Judith A. “Judy” Wolf were entrusted to Wilson-McReynolds Funeral Home, 900 N. Court St., Marion, IL. The time of the visitation was from 11:00 a.m. until 1:00 p.m. on Friday, March 3, 2017, at the funeral home. Following the time of visitation, the funeral service was at 1:00 p.m. with Rev. Dr. Tim Ozment presiding. The prelude and postlude musical selections were recorded piano selections. Special recorded vocal musical selections presented during the service were “One Day at a Time” by Cristy Lane, “Amazing Grace” by Elvis Presley, “In the Garden” by Patti Page, “You’ll Never Walk Alone” by Elvis Presley and “One Pair of Hands” by Carroll Roberson. Interment followed next to her husband Sam, in Maplewood Cemetery in Marion, IL. Pallbearers were Paul Null, Todd Litton, Daryl Obptande, Dylan Null, Matt Mueller and Roger Beasley. Following the committal service at the cemetery the family and friends gathered at Judy’s son’s home, Paul Null for a meal and continued time of fellowship and support. For additional information please contact the funeral home by calling at 618-993-2131.

The family of Judith Ann "Judy" Wolf created this Life Tributes page to make it easy to share your memories.