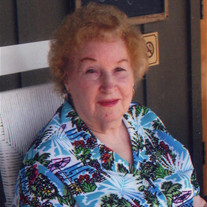 June Rodgers Lucker, age 90, of Marion, IL passed away at 6:50 p.m. on Wednesday, September 30, 2015 in Marion Rehabilitation and Nursing Center of Marion, IL. She was born on Saturday, August 8, 1925, in Marion, IL the daughter of Ezra and Edith (Fuller) Rodgers. June attended Lamaster Grade School and Marion High School Class of 1943. June was a long time member of the Cedar Grove Methodist Church north of Marion. After moving to the Chicago area she worked for and retired after thirty-six years with Reliable Electric in Chicago, IL. She was united in marriage to Raymond Lucker in 1975 in Melrose Park, IL and together they shared nineteen years of marriage until his death on October of 1994. June loved to travel, bowl and attend church. While working at Reliable Electric she made many friends and enjoyed traveling with them and her sister, Mary. She is survived by her sister, Mary Bearden Bloodworth of Marion, IL; brothers, Elmer Rodgers and Edgar Rodgers both of Marion, IL; son, Donald Ray Sherman of San Diego, CA; two grandsons, Jeremy Sherman and Michael Sherman of CA; one great granddaughter, Jessica Sherman; several nieces and nephews, other extended family and many friends. She was preceded in death by her parents, husband, Ray Lucker; brothers, Phillip “Sock” Rodgers; sister, Nina Baldwin; niece Melva Rodgers Crain three nephews, Virgil Rodgers, Matthew Kearney and Billy Gene Bearden. Arrangements for June Rodgers Lucker have been entrusted to Wilson-McReynolds Funeral Home, 900 N. Court St., Marion, IL. There will be a private graveside service with interment next to her husband in Rosehill Cemetery of Marion, IL. For those who prefer, memorial contributions can be made to “Hospice of Southern Illinois” and mailed in care of Wilson-McReynolds Funeral Home, P.O. Box 370, Marion, IL 62959. Memorial envelopes will be available at the Cemetery and the funeral home. For additional information please call the funeral home at 618-993-2131.

June Rodgers Lucker, age 90, of Marion, IL passed away at 6:50 p.m. on Wednesday, September 30, 2015 in Marion Rehabilitation and Nursing Center of Marion, IL. She was born on Saturday, August 8, 1925, in Marion, IL the daughter of Ezra and... View Obituary & Service Information

The family of June Rodgers Lucker created this Life Tributes page to make it easy to share your memories.