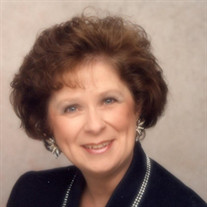 Karren Sue (Hook) Lenz, age 79, of Marion, IL, a loving wife, mother, grandmother, sister and friend passed away peacefully at 5:35 a.m. on Monday, October 28, 2019, with Hospice Care at home after a 4 month long battle with Glioblastoma. Family surrounded her, as she took the hand of Jesus and left this earthly life to spend eternity with him and those that have gone before her. Karren was born on Wednesday, October 23, 1940, in Herrin, IL the daughter of Oscar LeRoy and Julia Ann (Hemlock) Hook. She attended grade school in Zeigler, Royalton, IL, and Linton, IN and was a graduate of Herrin High School Class of 1958. Karren’s working career began at age 17 as a secretary for the Department of Personnel in Springfield, IL. After several years, she transferred to the Southern Illinois Office in Herrin. This office moved to Marion in 1972. She retired as an Administrative Assistant with the Illinois Department of Commerce and Community Affairs located in the Marion State Office Building, at the age of 57 on January 1, 1998. She was united in marriage to Thomas Rollin Lenz on Friday, May 8, 1998, in Belleville, IL. She and her husband had been together since December of 1982. Karren was baptized on June 10, 1990, at the First Church of God in Herrin. Some of Karren’s favorite memories were as a child living in Linton, IN. But her most wonderful memories were spending time with her husband, children, grandchildren, sisters, cousins and friends. She looked forward to hosting her Ukrainian Dinner for her sisters and cousin and also having HUGE Easter Dinners with Baskets and Easter Egg Hunts for her grandchildren, great grandchildren and nieces and nephews. Karren was a kind hearted, loving person who always did the best for her children and always put them and others before her. Throughout her journey she taught her children that family always comes first and to enjoy the simple things in life. Her grandchildren meant everything to her and were her world. Although her battle was short, she fought hard and vigilant until the end, just as she had done throughout her entire life. Always putting one foot forward and trailing a path that can surely inspire others. Her smile, hugs, kisses and laughter will be missed, but will one day be felt and heard again. Let all those that knew her take time from their day to celebrate her life just as she would want. She is survived by her husband, Thomas R. Lenz of Marion; daughter and son-in-law, Julie and Jeff Meneese of Marion; two sons and daughter-in-law, Jon and Kristy Neville of Johnston City, IL and Phillip Conner of Marion; grandchildren, Justin Boaz, Tyler Meneese, Nicholas Meneese and his wife Leilani, Michael Meneese, Emily Meneese, Zach Garland and his wife Kayleigh, Mason Bruce, Kayden Neville, Breanna Norris, Brandi Conner, Bethany Conner, nine great grandchildren and a host of nieces and nephews. Also surviving are three sisters and two brothers-in-law, Dodie and Delbert Denam, Jacky Brown and Helen and Earl Todd all of Herrin; sister-in-law, Pat Lenz of Springfield, IL; uncle, Sam Garnati of Herrin; cousin, Karla Mees and her husband Bob of Carterville, IL and special friends, Dave Morris, Pat Noakes, Carol Cruse and Gaytha Smith. Her parents, beloved Aunt Hatchu, stepfather Jack Gray, cousin Chuck Garnati, maternal grandparents and paternal grandparents, preceded her in death. The family wishes to express how much she loved her family and friends and will always be remembered as a loving wife, mother, grandmother, sister, cousin and friend. We would also like to extend our deepest gratitude to Hospice, the many friends/family that helped during this time, whether it was with prayers, meals, or visits. Last, but certainly not least, we would like to thank TLC Home Care, specifically Lisa Fann, for taking such good care of our mother during her illness. We will forever be grateful for each and every one of you. Arrangements were entrusted to Wilson-McReynolds Funeral Home, 900 N. Court St., Marion. The visitation was from 11:00 a.m. to 1:30 p.m. on Friday, November 1, 2019, at the funeral home. Following the time of visitation, the funeral service was at 1:30 p.m. with her daughter and son-in-law, Julie and Jeff Meneese and son, Jon Neville presiding. Comment of memories by the grandchildren was presented by Emily Meneese being supported by the grandchildren around her. The prelude and postlude musical selections were recorded piano selections. Special vocal musical selections presented during the service were “It Is Well With My Soul” by Leilani Meneese being accompanied on the guitar by Jeff Meneese and “Amazing Grace - My Chains Are Gone” by Jeff Meneese who accompanied himself on the guitar. Interment followed in Rose Hill Cemetery of Marion. Pallbearers were Justin Boaz, Michael Meneese, Nicholas Meneese, Mason Bruce, Nathan Dawson and Stephen Garland. At the graveside those attending sang “Amazing Grace”. Following the committal service at the graveside the family and friends gathered at Walt’s Restaurant of Marion for a meal and continued time of fellowship. For those who preferred, memorial contributions were made to either or both; “Glioblastoma Foundation” and/or the “The Alzheimer’s Association” and mailed in care of Wilson-McReynolds Funeral Home, 900 N. Court Street, Marion, IL 62959. Memorial envelopes were available at the funeral home. For additional information call the funeral home at 618-993-2131.

The family of Karren Sue Lenz created this Life Tributes page to make it easy to share your memories.

Send flowers to the Lenz family.