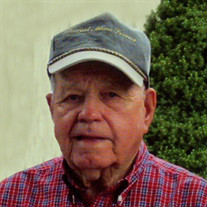 Kenneth L. McGee, age 88, of rural Carbondale, located southwest of Marion in Williamson County, IL, passed away peacefully at 2:23 p.m. on Friday, May, 1, 2015, at his home. He was born on Wednesday, July 7, 1926, at home on a farm that is now part of the Crab Orchard Refuge in Williamson County, IL the son of Clethra and Bertie (Cannon) McGee. Kenneth was united in marriage to Mary Ann Walker on Thursday, January 31, 1946, in Marion, IL and together they shared over sixty-six years of marriage until her death on June 10, 2012. He was a hard worker all of his life with the majority of his working career being in construction as a supervisor/foreman for many companies of the area including L.D. Fern, Henry Mitchell and the last with Ben Followell until his retirement in the mid 1990’s. He also enjoyed spending many hours working on various projects on his farm and raising cattle. The day he passed he had spent the morning working on the farm; hard work was something he enjoyed. Kenneth was of the Baptist faith and earlier in his lifetime attended Oak Grove Church located southwest of Marion. He also was a member of the International Labor’s Union and the Goreville Masonic Lodge. In his spare time he enjoyed gardening and quail hunting when he was younger. He was an avid St. Louis Cardinal fan and enjoyed spending time with his family, taking interest and giving advice and encouragement in their many activities; especially his grandchildren. The many memories that have been created will now be cherished by those he leaves behind. He is survived by daughter and son-in-law, Jennifer and Tom Hartwell of Marion, IL; son, Larry McGee and Beverly McWilliams of Goreville, IL; four grandchildren, Brad McGee and wife Janae of Herrin, IL, Holly Pomrening and husband Brian of Springfield, MO, Ryan Hartwell and wife Sara of Marion, IL and Kyle Hartwell and wife Billie of Marion, IL; eight great-grandchildren, Courtney May and her husband Justin of Carterville, IL, Shanea Simmerman and friend Mike May of Overland Park, KS, Christian and Caleb Pomrening both of Springfield, MO, Olivia and Grace Hartwell both of Marion, IL and Colton and Maggie Hartwell both of Marion, IL; two sisters and one brother-in-law, Ramona Waldrop of Herrin, IL and Pat Noakes and her husband P. D. of Marion, IL; brother and sister-in-law, Paul McGee and wife Gene of Marion, IL, two sisters-in-law, Liz Walker of Grand Blanc, MI and Viola Roach of Johnston City, IL, several nieces, nephews other extended family members and many friends. He always had dogs during his lifetime and his two special dogs that currently were always with him are Bear and Jodie. He was preceded by his parents, wife; brothers-in-law, Gary Roach, Jim Walker, Ronald Waldrop, Clifton Morgan, and sister-in-law, Margaret Morgan. Arrangements for Kenneth L. McGee were entrusted to the Wilson-McReynolds Funeral Home, 900 N. Court Street, of Marion, IL. Visitation was from 5:00 p.m. until 8:00 p.m. on Monday, May 4th, at the funeral home. During the time of visitation a “Reflection of Life” DVD Memorial Tribute featuring special people, places and events of Kenneth’s life was presented to the family and friends. The funeral service was at 11:00 a.m. on Tuesday, May 5, 2015, at Wilson-McReynolds Funeral Home, with Elder Kevin Waldrop presiding. Comments of memories were presented by family members; Olivia Hartwell, Maggie Hartwell, Kyle Hartwell, Billie Hartwell, Courtney May and Ryan Hartwell. The prelude and postlude musical selections were recorded piano selections. Special vocal musical selections presented during the service were “Life Is Like a Mountain Railway”, “Mansion Over the Hilltop” and “Peace In the Valley” all by Natalie Hatfield and Elvis Cameron with Elvis accompanying on the guitar. Interment followed next to his wife in Wolf Creek Cemetery located southwest of Marion, IL in Williamson County. At the cemetery the special vocal musical selection “I’ll Fly Away” was presented by Natalie Hatfield and Elvis Cameron with Elvis accompanying on the guitar. Honorary pallbearers were Christian Pomrening, Caleb Pomrening and Colton Hartwell. Active pallbearers were Brad McGee, Ryan Hartwell, Kyle Hartwell, Brian Pomrening, Justin May and Ronnie Webb. After the service at the cemetery the family and friends gathered at the Second Baptist Church of Marion for a meal and continued time of fellowship and support. For additional information please contact the funeral home by calling 618-993-2131.

The family of Kenneth Lee McGee created this Life Tributes page to make it easy to share your memories.

Send flowers to the McGee family.