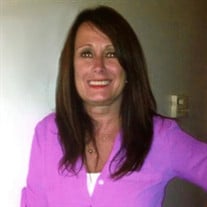 Lisa Ann Segretario-Niggeman, age 62, of Marion, IL, passed away with her loving children and their father by her side, at 12:48 p.m. on Wednesday, March 16, 2022, at her home. She was born on March 14, 1960, in Marion, IL, the daughter of Augustine Joseph and Shirley Lou (Griffith) Segretario. Lisa attended school in Marion, and was a graduate of Marion High School Class of 1978. She continued with her education at Southern Illinois University of Carbondale, IL, where she received her Associate Degree of Applied Science in Court Reporting. She was united in marriage to John Staton Niggeman, on November 26, 1983, in First Baptist Church of Marion, and this union was blessed with 3 children; Brittany Noelle, Conrad Cole and Autumn Brianne. Her working career for nearly 30 years, was with the Williamson County Court House in the First Judicial Circuit as an Official Court Reporter 4, the highest recognition possible with the state, being real time proficient. Lisa, loved her job and had hoped to be well enough to return. She was of the Catholic faith. In her spare time, she enjoyed traveling, especially to the ocean and spending time relaxing on the beach. She was a very social person; she never met a stranger. She enjoyed being with her many friends and will be remembered for always having a smile. She also enjoyed spending time exercising and had run in many local races in the area. She had a love for animals and had rescued many during her lifetime. Lisa’s greatest love were her 3 children and grandsons who were a shining light in her life. It was her wish to be around, to watch them grow up. Lisa, was a very loving and giving person and always put herself after everyone else. She is survived by her three children, Brittany Niggeman (Shaun) and Conrad Niggeman both of Marion, and Autumn Edwards of Lafayette, CO; three grandsons, Camden John Nemeth and Lucca Cole Nemeth both of Marion, and Bankston Cruz Edwards of Lafayette, CO; brother, Gary Segretario and wife, Barbara of Orlando, FL; sister, Joni Emmerson of Paducah, KY, a host of nieces and nephews who she was very close to, other extended family and many friends. She was preceded in death by her parents; brother, Joseph Anthony “Tony” Segretario, grandmother, Viola Harmon and many beloved pets. Arrangements are entrusted to Wilson-McReynolds Funeral Home, 900 North Court Street, Marion, IL. The visitation will be from 4:00 p.m. to 7:00 p.m. on Tuesday, March 22, 2022, at the funeral home. Following the time of visitation, the memorial service will be at 7:00 p.m. with Pastor Tom Emmerson presiding. The family has requested for those who prefer, memorial contributions be made to either or both; “St. Jude Children’s Research Hospital” and/or “Finding Forever Animal Rescue” in Marion. Memorial contributions may be mailed in care of Wilson-McReynolds Funeral Home, 900 N. Court Street, Marion, IL, 62959. Memorial contribution envelopes will be available at the funeral home. For additional information call the funeral home at 618-993-2131.

The family of Lisa Ann Segretario-Niggeman created this Life Tributes page to make it easy to share your memories.

Send flowers to the Segretario-Niggeman family.