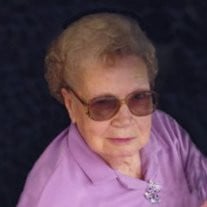 Lois Marie Adams, age 92, of Energy, IL passed away at 8:20 a.m. on Saturday, January 26, 2013, in Herrin Hospital of Herrin, IL. She was born on Friday, August 20, 1920, in Carterville, IL the daughter of James and Naomi (Manning) Knight. Lois was united in marriage to Ben Adams on Tuesday, June 2, 1936, in Carbondale, IL and together they shared over thirty six years of marriage until his death on March 2, 1973. She was a longtime member of the First Baptist Church of Energy, IL. Family was a very important part of Lois’ life and she always took interest in their many different activities and enjoying the times they all would gather together. The many memories that were created will now be cherished by those she leaves behind. She is survived by her son and daughter-in-law, Phillip and Ruth Ann Adams of Energy, IL; daughter, Shelbie Capps; six grandchildren, Kim Swinford and husband, Bill of Marion, IL, Brian Adams of Energy, IL, Susan Montgomery and husband, Mike of Indianapolis, IN, Gina Sparks of Fredericksburg, TX, Jessie Capps of Florida and Lari Stuart, seventeen great grandchildren and several great-great grandchildren; sister-in-law, Evelyn Knight formerly of Herrin, IL and now living in Granite City, IL, other extended family and many friends. She was preceded in death by her parents, husband; two sisters, Cecil Jones and Ethel Patrick and three brothers, Fred Garner, Clyde Knight and Claude Knight. Arrangements for Lois Marie Adams were entrusted to the Wilson-McReynolds Funeral Home, 900 N. Court Street, of Marion, IL. The time of visitation for family and friends was on Tuesday, January 29, 2013, from 11:00 a.m. until 2:00 p.m. at the funeral home. During the time of visitation a “Reflection of Life” DVD Memorial tribute featuring special people, places and events of Lois’ life was presented to the family and friends. Following the time of visitation the funeral service was at 2:00 p.m. with Rev. John Yeo presiding. The prelude and postlude musical selections were recorded piano selections. Special recorded vocal musical selections presented during the service were “In the Sweet Bye and Bye” by Ann Williamson, “What a Friend We Have in Jesus” by Daniel O’Donnell and “Blessed Assurance” by Bill and Gloria Gaither. Interment followed next to her husband in Odd Fellows Cemetery of Marion, IL. Pallbearers were Bill Swinford, Riley Swinford, Samuel Swinford, Charles Groves, Brian Adams and Mike Denison. After the committal service at the cemetery te family and friends gathered at First Baptist Church of Energy for a meal and continued time of fellowship and support. For those who preferred, memorial contributions were made to either “First Baptist Church of Energy” or “Hospice of Southern Illinois”. Memorial contribution envelopes were available at the funeral home or were mailed in care of Wilson-McReynolds Funeral Home, P.O. Box 370, Marion, IL 62959. For additional information please contact the funeral home by calling 618-993-2131.

The family of Lois Marie Adams created this Life Tributes page to make it easy to share your memories.

Send flowers to the Adams family.