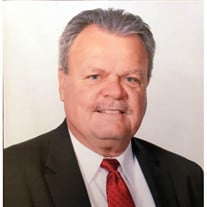 Loren L. Taylor, age 69, of Marion, IL, passed away peacefully with his family by his side, at 7:30 a.m. on Monday, October 19, 2020, in Integrity Healtthcare of Marion. He was born on Wednesday, April 4, 1951, in Flint, MI, the second son of Kenneth and Helen (White) Taylor. Loren was united in marriage to Debra Jan Puckett on Saturday, September 19, 1981, in the Dorrisville Baptist Church of Harrisburg, IL, and together they have shared over 39 years of marriage. After graduating from Michigan State University with a Masters Degree in Labor and Industrial Relations, he spent over thirty years as a Human Resource Professional. He worked in the coal industry in Illinois, West Virginia, and Wyoming. He also worked in chemical manufacturing in Buffalo, NY and metals manufacturing in Las Vegas, NV. He retired in 2011, from General Dynamics in Marion, IL, as director of Human Resources. He was a member of First Presbyterian Church of Marion, IL. Loren was a former member of the governor’s grievance panel, the Southern Illinois Personnel Managers Assoc., Illinois Master Gardeners Program, the Egyptian Senior Golf Assoc., and the Industrial Relations Research Assoc. He was a former member of the Bridge Structural and Ornamental Ironworkers Local 426 in Detroit, Michigan. He was a lifelong Michigan State University sports fan as well as a Detroit Redwings fan. Besides cheering for his favorite sports teams, he was an avid golfer, gardener, and loved to hunt for the elusive morel mushroom. He is survived by his wife, Debra J. Taylor of Marion, IL; son, Nathaniel (Kallie) Taylor of Nashville, TN; granddaughter, Elodie Taylor; son, Jackson Blair (Ana) Taylor of Seattle, WA; mother, Helen Taylor of Clio, MI; brother, Ken (Susan) Taylor of The Villages, FL; brother, Mathew (Laurie) Taylor of Millington, MI; brother-in-law, Bill (Diane) Puckett of Harrisburg, IL, numerous aunts, an uncle, and numerous nieces, nephews, and cousins and many friends. He was preceded in death by his father; brother, Kevin (Diana) Taylor, and a brother and sister in infancy. Due to Covid-19, and the health and travel concerns for family and friends, a memorial service will be held at a later date. Memorials may be made to the First Presbyterian Church, 1200 S. Carbon St., Marion, IL 62959 Many thanks to the Cancer Support group of the First Presbyterian Church, Reverend Wade Halva, and the congregation. Your prayers, friendship, and guidance have been invaluable. Arrangements have been entrusted to Wilson-McReynolds Funeral Home, 900 N. Court St., Marion. For additional information call the funeral home at 618-993-2131.

The family of Loren Lee Taylor created this Life Tributes page to make it easy to share your memories.

Send flowers to the Taylor family.