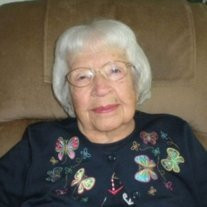 Louise Maynard, age 102, of Washington, IL, formerly of Marion, IL, passed away at 10:45 p.m. on Sunday, January 5, 2014, at Washington Christian Village of Washington, IL. She was born on Thursday, August 10, 1911, in Herrin, IL, the daughter of John Oscar and Bertie (Scrivner) Frick. She was united in marriage to Clyde Maynard on Friday, August 5, 1932, in St. Louis, MO and together they shared 67 years of marriage until his death on Sunday, September 5, 1999. Also preceding her in death were her brother, Bob Frick; sister, Dorothy White; son-in-law, Fred Cagle and several brothers-in-law and sisters-in-law. Louise is survived by her daughter, Judy Cagle; son, Bob (Teri) Maynard; as well as grandchildren, Tracy (Matthew) Daugherty, Eric (Renee) Cagle, Chris (Brooke) Maynard, John Maynard and Brittany (Brian) Glynn; great-grandchildren, Carrie Hurlbut, Nathan Cagle, Evan Cagle, Amelia Louise Cagle, Morgan Cagle and Isabelle Maynard. Also among Louise’s survivors are brother, Bill (Dorothy) Frick; brother-in-law, Carl White; sister-in-law, Dorothy Hosford and several nieces and nephews. Louise graduated from Herrin High School in 1929, after which her family moved to St. Louis, MO. In 1932, she married Clyde Maynard, her high school sweetheart, and they lived in St. Louis until 1945, when they came back to Southern Illinois and settled in Marion. Louise lived in Marion for 55 years, leaving in 2000 after Clyde’s death, to move to Washington, IL to be near family. While primarily a homemaker, Louise held jobs outside the home. She worked at the Marion Daily Republican and later in the dental office of Dr. John Kaeser. She was an active member of Zion United Church of Christ of Marion, IL for over 50 years, a church with long-time family affiliations where her grandfather was a charter member and her father was in one of the first confirmation classes; at the time of her death, Louise was the oldest member at Zion. Many of her best friendships came from the fellowship at church. Louise held office in Williamson County Home Extension; she frequently used the recipes and other information from Home Extension in her home for the enjoyment of her family. Over the years she crocheted numerous afghans and made craft items that are still being used in the homes of family members. Louise volunteered in the church and community. She was a Cub Scout den mother, worked in the soup kitchen, and tutored school children through a neighborhood center. Writing was a lifelong source of enjoyment for Louise. She kept daily diaries and journals for many years, wrote long, newsy letters to family and friends, and frequently wrote poems. Family, however, was Louise’s main focus in life as she helped and encouraged but, most of all, loved and enjoyed her own family, her extended family, and the friends that became family. Louise’s family is indebted to Washington Christian Village for the care that she received the last 3 years, and to Unity Point Hospice for all they have done in recent weeks. Arrangements for Louise Maynard were entrusted to Wilson-McReynolds Funeral Home, 900 N. Court St., Marion, IL. Cremation was accorded. The visitation for the family and friends was from 10:00 a.m. to 11:30 a.m. on Saturday January 18, 2014, at the funeral home. During the time of visitation a “Reflection of Life” Memorial DVD Tribute featuring special people, places and events in Louise’s life was presented to the family and friends. Following the time of visitation the funeral service was at 11:30 a.m. with Rev. John Holst presiding. Comments of memory were also presented by Louise’s son, Bob Maynard. The prelude and postlude musical selections were presented by pianist, Sharon Wilson. Special instrumental piano selections presented during the service were “Five Foot Two, Eyes of Blue” and “Here I Am Lord”. Interment followed next to her husband in Rose Hill Cemetery of Marion, IL. Following the committal service at the cemetery the family and friends gathered at Zion United Church of Christ for a meal and continued time of fellowship and support. For those who preferred, memorial contributions were made to either “Zion United Church of Christ” of Marion, IL, “Washington Christian Village” of Washington, IL or “Unity Point Hospice” of Peoria, IL. Memorial contribution envelopes were available at the funeral home or were mailed in care of Wilson-McReynolds Funeral Home, P.O. Box 370, Marion, IL 62959. For additional information please contact the funeral home by calling 618-993-2131.

The family of Louise Maynard created this Life Tributes page to make it easy to share your memories.

Send flowers to the Maynard family.