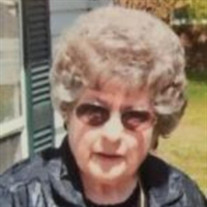 Mary L. Boyd, age 88 of Herrin, IL, formerly of rural Marion, IL, passed away peacefully at 5:40 a.m. on Monday, June 22, 2020, in Herrin Hospital. She was born on Wednesday, September 16, 1931, in Marion, the daughter of Paul Fitzgerald and Mary (Thomas) Smith. Mary was united in marriage to Winfred Ralph “W.R.” Boyd, Sr., on Sunday, February 20, 1949, in Piggott, AR, and together they shared over 51 years of marriage until his death on Friday, March 31, 2000. Mary’s working career was with the National Transformer Company of Johnston City, IL, for several years until the late 1970’s. She then decided to remain at home on the farm and devoted her time to managing her home, seeing to the needs of her family and helping on the farm when needed and was proud of it. Her church membership was with No. 9 Baptist Church near Corinth, IL, and had been faithfully attending at Whiteash Freewill Baptist Church, located north of Marion, for several years until her health declined. In her spare time she enjoyed watching her favorite soap operas and the older television programs like “Andy Griffith”, “Perry Mason” and “Gunsmoke”. She also was an avid reader and often was found very early in the morning sitting in her chair with a book in her hand. She loved her family, especially her grandchildren and great grandchildren, and was always interested in all of their many different activities. She enjoyed the special holidays, like Thanksgiving and Christmas, being able to cook for everyone and having everyone together. The many memories created will now be cherished by those she leaves behind. She is survived by her son and daughter-in-law, Charles and Teresa Boyd of Herrin, IL; four grandchildren, Wendy Carrell, Duane Williams, Emily Corson and J.P. Boyd; six great grandchildren, Daniel Caplinger, Kayce Caplinger, Jonathan Williams, Kaytlynn Williams, Aiden Corson and Lucas Corson, other extended family and many friends. She was preceded in death by her parents, husband; daughter, Pauletta Williams; son, Winfred Ralph Boyd, Jr.; sister, Blanche Louise Ray and brother, Emery Gail Smith. Arrangements have been entrusted to Wilson-McReynolds Funeral Home, 900 N. Court St., Marion. The graveside committal service with Pastor Andy Lee presiding will be private in Maplewood Cemetery of Marion. Following the service interment will be next to her husband. For those who prefer the family has requested memorial contributions in memory of Mary, be made to “St. Jude Children’s Research Hospital”. Memorial contributions may be mailed to Wilson-McReynolds Funeral Home, 900 North Court St., Marion, IL 62959. Memorial envelopes will also be available at the funeral home. For additional information call the funeral home at 618-993-2131.

The family of Mary Lou Boyd created this Life Tributes page to make it easy to share your memories.

Send flowers to the Boyd family.