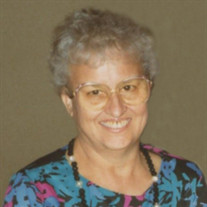 Maude A. Webb, age 90, of Marion, IL passed away peacefully with her family by her side at 3:50 p.m. on Saturday, February 3, 2018, in Parkway Manor of Marion, IL. She was born on Thursday, September 22, 1927, in Grand Chain, IL the daughter of Theodore and Fannie (Eddleman) Goins. Maude attended school in Grand Chain and Perks, IL. As a young girl during WW II in 1943, Maude starting writing to a young soldier from Johnson County, IL named William Earl Webb. They exchanged letters for the next two years and having never seen each other in person, “they fell in love through the letters.” Earl returned from the war, and on December 25, 1945, Maude and Earl met face to face for the first time. They were united in marriage on Sunday, February 10, 1946, in Marion and together they shared total devotion for each other for the next 63 years until his death on Thursday, December 17, 2009. Maude’s working career was with Smoler Brothers of Herrin, IL for 23 years until her retirement in 1979 as a supervisor. After her retirement she worked for her daughter, Wanda at Calico Country Craft and Sewing Shoppe from 1983 until 1989. Maude loved her family and enjoyed managing her home and seeing to the needs of her family. She was a God loving woman and was a member of the First Church of the Nazarene located on White Street in Marion since 1958. In her spare time she enjoyed volunteering for the Hospital Auxiliary working at the Thrift Shop and was very active with the Woodmen of the World Organization. She also loved visiting with people, spending time outdoors, gardening, and fishing; especially at her daughter’s lake “Lake Chelsea”, working puzzles, and spending time with her family. She was always interested in all of their many activities and enjoyed the many times, especially the annual family reunions, when they all would be together. The many memories that have been created will now be cherished by those she leaves behind. She is survived by her daughter and son-in-law, Wanda and Mike Cain of Marion; five grandchildren, Brent Cain and wife Shelly of Marion, IL, Jeff Cain and wife Cynthia of Columbia, SC; Brad Webb of Myakka City, FL, Alexa Webb-Niklinski and husband Cyril of Parrish, FL and Alison Lacy and husband John of Myakka City, FL; eight great grandchildren, Ryan Cain, Colby Cain, Kaylee Barnes, Beau Barnes, Zane McDaniel Cain, Alston Webb, Conner Niklinski and Emily Webb; two sisters-in-law, Alice Blue of Marion, IL and Patsy Atwood and husband, Dale, of Marion; brother-in-law, L.D. Bowers of Puxico, MO, a host of nieces, nephews, other extended family and many friends. She was preceded in death by her parents; husband; son, Victor Webb and daughter-in law, Carol Palm Webb; infant granddaughter, Stacey Renee Webb; three sisters, Hazel Hinkel, Loretta Snell, and Helen Turner; and three brothers, Homer, Lawrence, and Imon Goins. Arrangements for Maude Webb were entrusted to Wilson-McReynolds Funeral Home, 900 N. Court St., Marion. The visitation was from 5:00 p.m. to 8:00 p.m. on Friday, February 9th at the funeral home. The funeral service was at 2:00 p.m. on Saturday, February 10, 2018, with Pastor Bobby Parker and Rev. Woody Webb presiding. The service began with a “Reflection of Life” DVD Memorial Tribute featuring special people, places, and events of Maude’s life with songs, “In Color” by Jamey Johnson, “I Can Only Imagine” by MercyMe, “When I Get Where I’m Going” by Brad Paisley featuring Dolly Parton, “Amazing Grace” by Alan Jackson, and “Will the Circle be Unbroken” by Randy Travis. Comments of memory were presented by her niece, Carolyn Hale, and the eulogy was presented by her grandson, Brent Cain. Speical vocal musical selections presented during the service were “Serenaded by Angels” and “In the Garden” both by Rhonda McWilliams with a recorded accompaniment. The postlude musical selections were “Precious Memories” by Alan Jackson, “Just a Rose Will Do” by the Marksmen Quartet, and “When We All Get to Heaven” by Brad Paisley. Interment followed next to her husband in Webb Cemetery, of Tunnel Hill, IL. Those serving as pallbearers were Brent Cain, Jeff Cain, Brad Webb, Ryan Cain, Colby Cain, and Zane Cain. Following the graveside committal service at the cemetery the family and friends gathered at the First Chuch of the Nazarene for a meal and continued time of fellowship and support. For those who preferred, memorial contributions were made to “First Church of the Nazarene” and mailed in care of Wilson-McReynolds Funeral Home, 900 N. Court Street, Marion, IL 62959. Memorial envelopes were available at the funeral home. For additional information call the funeral home at 618-993-2131.

The family of Maude Alice Webb created this Life Tributes page to make it easy to share your memories.

Maude A. Webb, age 90, of Marion, IL passed away peacefully with...

Send flowers to the Webb family.