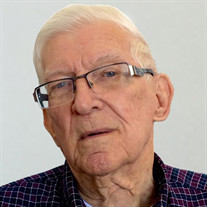 Maurice Dean “Mac” Durall passed away March 10, 2016 at home surrounded by family and friends. Mac was born October 14, 1929 in Marion, IL to Clarence Agnew Durall and Sarilda Parsons Durall, the fourth of four children. His sisters Kathlyn Durall Bell and Margaret Durall Hartwell predeceased him. He is survived by his sister Lois Durall Burks. Mac married Colleen Pedigo on December 22, 1950. They have four children: Patricia Lynn (John), Sandra Kibler (Keith), Julie Choate (Brad), and David Durall. There are seven grandchildren: Rachel Lynn Dunston (Andy), Katie Lynn Buckman (Barry), Chelsea Kibler Tang (Johann), Jonathan Kibler (Amanda), Brent Choate (Mary), Lauren Choate, and Lindsey Choate Sweeney. He has seven great grandchildren Grady Dunston, Michael, Alex, Kate and Ben Choate, Rhema Tang and Dylan Sweeney. He was happy to know that four great granddaughters are joining the family this spring: Sara Kate Dunston, Adalyn Grace Buckman, Lydia Eleanor Kibler, and Willow Tang. He is also survived by nephews, Harold Bell (Lois), Jerry Bell (Kay), Bill Burks, Jeff Burks (Julie), Tom Hartwell (Jenny) and Neil Hartwell. Mac was a lifetime member of the 2nd Baptist Church in Marion, teaching Sunday School for many years. He had a beautiful voice and was a soloist and a member of the choir from the age of 16 until he was 85 years old. Mac was a Kiwanian for 31 years, served as a volunteer at the VA and Marion hospitals and Gideons for many years. He was in the military during the Korean War era. He was a born salesman. He established Durall TV in Marion, selling televisions and putting up antennas. He sold two way radio communications, and then worked for several years successfully selling cellular phones. If Mac wanted you to buy something, you were wise to just pull out your checkbook. He was persistent and patient. Mac was often seen around town in parades, driving his classic cars and sitting at the car show on the square in his red convertible Auburn Boattail Speedster. He restored several classic Packard vehicles and his Auburn. Mac was known for his faith in God, his white hair, gentle slow speech, and sense of humor. He was independent and busy until his final illness. He appreciated the many visits, calls and cards after he became ill. He loved his family and friends, church, music, his work and the sound of a good engine. He had a great life. Arrangements for Maurice Dean “Mac” Durall were entrusted to Wilson-McReynolds Funeral Home, 900 N. Court St., Marion, IL. The visitation was at Second Baptist Church, 308 S. Russell, Marion, IL, Monday, March 14, 2016 from 9:00 a.m. to 11:00 a.m. During the time of visitation a “Reflection of Life” DVD Memorial Tribute featuring special people, places and events of Mac’s life was presented to the family and friends. Following the time of visitation the funeral service was at 11:00 a.m. with Dr. Bob Wagner and Rev. Mark Mohler presiding. The prelude and postlude musical selections were presented by pianist, Shirley Lantrip. Vocal musical selections presented during the service were “His Eye Is on the Sparrow”, “It Took a Miracle” & “It Is Well With My Soul” by Danny Ward, accompanied by Shirley Lantrip on the piano. A special recording was also presented of Mac singing a medley of songs. Interment followed at Rose Hill Cemetery in Marion, IL. Military honors were accorded at the graveside by members of Heyde-Pillow V.F.W. Post No. 1301, American Legion Post No. 147 both of Marion and the Illinois National Guard Funeral Honors Burial Detail of Marion. Those participating were Commander, Larry Largent; Chaplain, Ron Ganzer; Officer of the Day, Ernie Rinella; Bugler, Bill Rice; Color Guard, Jesse James and Tim Payne; National Colors, Jeff Hoffard; American Legion Colors, Ralph Devasier; POW/MIA Colors, Bob Casey; Firing Squad, Don Burgrabe, Gene Broombaugh, Bill Hampsey, Bill Hatfield, Fred Read, Ron Russell and Jerry Swisher. Illinois National Guard members participating in the folding of the flag were SGT Garrett Lukens and SPC Erik Clapper. Presentation of the flag to Mac’s daughter, Patty was by SPC Erik Clapper. Pallbearers were Ryan Hartwell, Kyle Hartwell, Brad Choate, Jonathan Kibler, Keith Kibler and Tom Hartwell. Following the committal service at the cemetery the family and friends gathered at Second Baptist Church for a meal and continued time of fellowship. In lieu of flowers, donations to the “Marion Senior Citizens Center”, 507 West Main, Marion, IL 62959 or “Hospice of Southern Illinois”, 204 Halfway Rd., Marion, IL 62959 in his name would be appreciated. Memorial envelopes were available at the church and the funeral home. For additional information please call the funeral home at 618-993-2131. "A Special Poem Just for Mac" The Lord would come by Mac’s and they would get out the Auburn Boattail Speedster and take it for a slow drive in the evenings. It was their time to talk about the events and problems of the day. One evening, they drove out into the country, because it was a particularly beautiful day. They came to a bend in the road, and the Lord said, "This is beautiful, let's go a little further." When it began to get dark, Mac started to worry about the drive back. The Lord knew this. So he said, "Mac, you're not the best night driver, and I'd hate to see you mess up this lovely old car, so why don't you come home with me tonight? You've got family and friends there, that would love to see you." Mac thought about it, and he said, "I have 4 more grandchildren coming in April and May that I want to meet. The Lord said, "Mac, you won't miss that. In the blink of an eye, they'll all be with you forever!"

The family of Maurice Dean "Mac" Durall created this Life Tributes page to make it easy to share your memories.