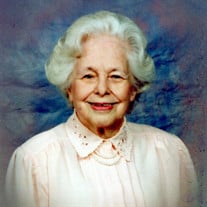 Mildred I. Walker, age 98, of Marion, IL, formerly of Goreville, IL and Valley Park, MO, passed away peacefully at 11:20 p.m. on Saturday, September 10, 2016, in Parkway Manor of Marion. She was born on Sunday, June 16, 1918, in rural Johnson County, IL near Goreville, the daughter of John Thomas and Della Mae (Burlison) Walker. After the death of her father in 1962, her mother remarried to Ben Bovinet. Mildred attended school in Goreville and was a graduate of Goreville High School Class of 1936. She also attended and was a graduate of the Raley’s School of Beauty College of Harrisburg, IL. She was united in marriage to Thomas Edward Walker of Buncombe, IL on Saturday, July 3, 1937, in Cape Girardeau, MO and together they shared nearly 55 years of marriage until his death on Thursday, April 30, 1992. At the age of 26 she began to lose her eyesight due to inoperable cataracts. Five years later she lost an eye due to an automobile accident. In the years following, she learned to read Braille while continuing to manage her home and meeting the needs of her husband and two daughters. In 1961, after another auto accident, doctors found a way to operate on the remaining eye. This new surgery and successful operation made the medical journals. After receiving sight in one eye she learned to drive, and renewed her Cosmetology License and opened Mildred’s Beauty Shop in Eureka, MO. After retiring she continued operating a beauty shop in her home until the age of 85. She is a member of Aldersgate United Methodist Church since moving to Marion in 1994. She previously was a member of the Valley Park United Methodist Church of Valley Park, MO, where she taught an adult Sunday School Class for 40 years. Mildred loved her family and was always encouraging them in all of their many activities, especially those of her grandchildren and great grandchildren and enjoyed the many times they all shared together. The memories that were created will now be cherished by those she leaves behind. She is survived by her daughter and son-in-law, Vicki and Larry Grove of Marion; son-in-law, Gary Jeffords and his wife Lori of St. Charles, MO; granddaughter, Michele Malone and her husband Scott of Benton, IL; two grandsons, Brian Jeffords and his wife Lily of Manhattan Beach, CA and Michael Jeffords and his wife Margie of Clareton Hills, IL; six great grandchildren, Kayla Malone and Alex, Sophia, Charlie, Nora and Thomas Jeffords, other extended family and many friends. She was preceded in death by her parents, husband, step father; daughter, Cheryl Jeffords; sister, Mae Bohanon and also an infant sister and two infant brothers. Arrangements for Mildred I. Walker were entrusted to Wilson-McReynolds Funeral Home, 900 N. Court St., Marion, IL. The visitation was from 11:00 a.m. until 1:00 p.m. on Wednesday, September 14, 2016, at the funeral home. During the time of visitation a “Reflection of Life” DVD Memorial Tribute featuring special people, places and events of Mildred’s life was presented to the family and friends. Following the time of visitation the funeral service was at 1:00 p.m. with Rev. Dr. Tim Ozment presiding. The prelude and postlude musical selections were presented by pianist, Judy Hopkins. Special musical selections presented during the service were “His Eye Is On the Sparrow” and “Amazing Grace” by Mildred’s great granddaughter Kayla Malone on the flute with pianist, Annette Lawson accompanying. Interment followed next to her husband in Cana Cemetery located north of Goreville, IL in Johnson County. Pallbearers were Terry Coonce, Scott Malone, Brian Jeffords, Michael Jeffords, Angela Coonce and Monty Webb. Following the committal service at the cemetery the family gathered at Aldersgate United Methodist Church of Marion, for a meal and continued time of fellowship and support. For those who preferred, memorial contributions were made to either “Illinois Talking Book Outreach Center” or “The Marion Ministerial Alliance” and mailed in care of Wilson-McReynolds Funeral Home, 900 N. Court St., Marion, IL 62959. Memorial envelopes were available at the funeral home. For additional information please contact the funeral home by calling 618-993-2131.

The family of Mildred Irene Walker created this Life Tributes page to make it easy to share your memories.

Send flowers to the Walker family.