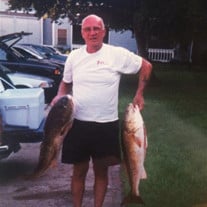 Nicholas Stewart, Jr., age 76, of Marion, IL, passed away at 7:17 a.m. on Monday, May 22, 2017, in the Integrity Health Care Center of Marion. He was born on Tuesday, November 5, 1940, in West City, IL, the son of Nicholas Stewart, Sr. and Virginia (Henson) Stewart. He was raised by his father and stepmother, Ruth. Nicholas attended school in Benton, IL and was a graduate of Benton High School Class of 1959. While living in Grand Isle, Louisiana he worked on the oil rigs. He later moved and lived in Kenner, Louisiana and worked as a painter. Upon returning to Illinois and moving to Marion he worked for the Marion Kroger and Menards for several years until his retirement. He loved being in the outdoors and all of his lifetime enjoyed all types of fishing. He also was an avid St. Louis Cardinal Baseball fan and Green Bay Packer Football fan. He loved his family and the many memories that have been created will now be cherished by those he leaves behind. He was survived by two daughters and sons-in-law, Donna and Jose Jimenez of Montgomery, IL and Melinda and Scott Allen of Aurora, IL; four grandchildren, Ashley and Kyle Elkins both of Montgomery and Jennifer and Rachel Allen both of Aurora; half sister, Kathy Rogers and her husband Don of Pisgah Forest, NC, other extended family, and many friends. He was preceded in death by his parents and step mother. Arrangements for Nicholas Stewart, Jr. were entrusted to Wilson-McReynolds Funeral Home, 900 N. Court St., Marion, IL. There will not be any public services at this time. For additional information please contact the funeral home by calling 618-993-2131.

The family of Nicholas Stewart Jr. created this Life Tributes page to make it easy to share your memories.

Send flowers to the Stewart family.