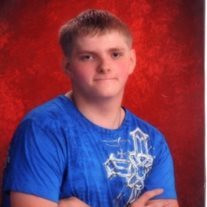 Nickolas “Nick” Morton England, age 17, of Marion, IL, passed away suddenly at 4:41 p.m. on Sunday, February 2, 2014, at Heartland Regional Medical Center of Marion, IL. He was born on Sunday, July 28, 1996, in Carbondale, IL, the son of Jerry A. and Barbara R. (Wise) England. Nick was a Marion High School Senior where he was an active member of the Choir and the Skills U.S.A. Club. He enjoyed spending time with his family and friends and listening to his favorite music. He is survived by his mother, Barbara R. England of Marion, IL; father, Jerry A. England of Crainville, IL; brother, Brandon and his sister, Stormie both at home; maternal grandparents, Larry and Dixie Garris of Marion; aunts and uncles of his father’s family, Karen and Carl Santamaria, Bobbie and Sue England, Laura and Skip Foley, Dennis and Denise England, Keith England, Robin England and Holly England and numerous cousins; aunts and uncle of his mother’s family, Roy and Leann Wise, Walt and Barb Sipple, Mark and Angie Parsons, Jerri Lynn and Jim Richards and Terri Garris and numerous cousins including Dylan Davis, Rachael Wise and Jimmy Jackson, other extended family members and many friends. He will be missed by his faithful dog, Copper. He was preceded in death by his infant sister, Bambi; paternal grandparents, Robert Webster and Eleanor Anna England; maternal grandfather, Morton Wise and aunt, Wanda Davis. Arrangements for Nickolas “Nick” Morton England were entrusted to Wilson-McReynolds Funeral Home, 900 N. Court Street, of Marion, IL. The time of visitation for the family and friends was between the hours of 10:00 a.m. to 1:00 p.m. on Saturday, February 8, 2014, at the funeral home. During the time of visitation a “Reflection of Life” DVD Memorial Tribute featuring special people, places and events of Nick’s life was presented to the family and friends. Following the time of visitation the funeral service was at 1:00 p.m. with Rev. Steve Shea presiding. The prelude and postlude musical selections were recorded piano selections. The service began with the Marion High School Choir singing acappella “Let It Be” and “Blessing of Aaron”. Special recorded vocal selections presented during the service were “Turn the Page” by Bob Seger, “When I Get Where I’m Going” by Brad Paisley and Dolly Parton, “Bless the Broken Road” by Rascal Flatts and “If Heaven Wasn’t So Far Away” by Justin Moore. Interment followed in Maplewood Cemetery of Marion, IL. Pallbearers were Matthew Caraway, Ethan Randoll, Aaron Drury, Trenton Lange, Tyler Karnes, Ben Mitchem and Jeremiah Stonecipher. Following the committal service the family and friends gathered at Spillertown Baptist Church for a meal and continued time of fellowship and support. For additional information, or to leave an online “Condolence of Memory” or light a “Candle in Memory”, please visit our website at www.wilsonmcreynolds.com or call 618-993-2131. For additional information please contact the funeral home by calling 618-993-2131.

The family of Nickolas "Nick" Morton England created this Life Tributes page to make it easy to share your memories.