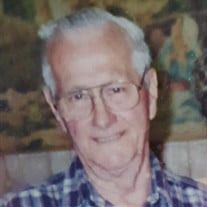 Paul L. Burroughs, age 88, of Marion, IL passed away at 9:45 p.m. on Tuesday, June 11, 2019, in Integrity Healthcare Center of Marion. He was born in rural Williamson County, IL, on Monday, October 27, 1930, the son of John J. and Cecil Edith (Grimes) Burroughs. Paul answered the call of this nation by serving in the United States Army beginning in 1955 and served faithfully until the time of his honorable discharge in 1962, with the rank of Specialist 4th Class. He was once united in marriage to Allene Burns until her death. He later was united in marriage to Wilma Dean (Walker) Johnson on Tuesday, December 8, 1998, in Marion, and together they have shared nearly 21 years of marriage. The majority of his working career was with Goss Appliances of Marion, as a Service Technician. Paul was of the Pentecostal faith and has attended several churches of the area including; First Freewill Baptist Church, Grange Hall Free Will Baptist Church and First Apostolic Church all of Marion. In his spare time, he enjoyed woodworking, playing the guitar and oil painting. He was a wonderful artist with the ability to paint a wonderful painting from memory. He loved his family and enjoyed the times they would spend together. The many memories that have been created will now be cherished by those he leaves behind. He is survived by his wife, Rev. Wilma Dean Burroughs of Marion; step son, Randall Johnson and his wife Amy of Marion; step daughters, Angela Dean James and husband Alan of Goreville, IL and Patricia Wilson of Marion; four step grandchildren, Blake Johnson of Vienna, IL, Kendal Johnson of Marion, Jeremy James of Goreville and Cassie Alter and husband Chris of Goreville, six step great grandchildren, other extended family and many friends. He was preceded in death by his parents; son, Roger Burroughs and half sister Ruby. Arrangements have been entrusted to Wilson-McReynolds Funeral Home, 900 N. Court St., Marion. In accordance with Paul’s wishes there will not be any services accorded. For more information please call the funeral home at 618-993-2131.

The family of Paul Laverne Burroughs created this Life Tributes page to make it easy to share your memories.