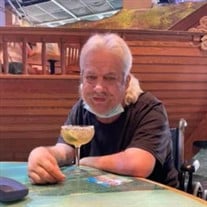 Randall Scott Little, age 62, of Creal Springs, IL, passed away at 4:35 p.m. on Tuesday, December 21, 2021, in Herrin Hospital of Herrin, IL. He was born on July 3, 1959, in Chicago, IL, the son of John Craik and Margaret Elizabeth (McKillop) Little. He was raised in Worth, IL and attended school there. He was united in marriage to Kila Jean Holmes on June 28, 2003, in the Mount Pleasant Baptist Church of the Poordo, IL, area and together they have shared over 18 years of marriage. Early in his working career he was a firefighter for several years. Later he began working for the United States Postal Service for a total of 35 years. He had worked in the Chicago, IL, area in various positions for the Postal Service and later transferred to the Carbondale, IL, Postal Service where he worked until his retirement in 2017. In his spare time, he enjoyed watching football, with his favorite team being the Chicago Bears, spending time with family playing cards and games, barbecuing, playing chess and when he was younger doing taxidermy that he had been trained how to do. He is survived by his wife, Kila J. Little of Creal Springs, IL; daughter, Rebecca A. Johnson and her husband, Garrett of Creal Springs, IL; granddaughter, Maylee Johnson of Creal Springs, IL; two brothers, Richard Little and his wife, Debbie of Mokena, IL and Bob Little and his wife, Lana of Brookston, IN; stepson, Zachary Johnson of Dykersburg, IL; stepdaughter, Kayla Johnson of Washington, IN; step grandson, Mason Henry of Rosiclare, IL, other extended family and many friends. He was preceded in death by his parents. Arrangements were entrusted to Wilson-McReynolds Funeral Home, 900 North Court Street, Marion, IL. The visitation was on Friday, January 7, 2022, from 5:00 p.m. to 7:00 p.m. at the funeral home. At the end of the visitation, three special recorded vocal musical selection were presented; “he Didn’t Have to Be” by Brad Paisley, “Daddy’s Hands” by Holly Dunn and “Old Hippie” by The Bellamy Brothers. Following the time of visitation, the family and friends gathered at Walt’s Restaurant in Marion, for a meal and continued time of fellowship and support. For additional information please call the funeral home at 618-993-2131.

The family of Randall Scott Little created this Life Tributes page to make it easy to share your memories.

Send flowers to the Little family.