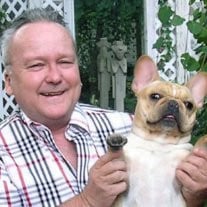 Randy Keith Anderson, age 55, formerly of Marion, IL, passed away at 8:13 p.m. on Saturday, March 16, 2013, at Memorial Medical Center of Springfield, IL. He was born on Saturday, August 10, 1957, in Marion, IL the son of Kenneth Cecil and Josephine Marriah (Holmes) Anderson. Randy attended school in Marion and was a graduate of Marion High School in 1975. Early in his lifetime he attended and became a member of Spring Hill Baptist Church northeast of Creal Springs, IL. Randy answered the call of this nation in 1978, by enlisting and serving in the United States Air Force. During his lifetime, Randy had lived in many different parts of the country but spent the majority of his time living in Florida where he was a landscaper for many years. Randy had a love for life and most importantly a love for people. He had an amazing sense of humor and a natural joy that was contagious to all who knew him. He spent his life surrounded by all that brought him the most joy; friends and family, travel, music, photography and his beloved pets. He is survived by his mother, Josie M. Anderson of Marion, IL; his twin sister, Sandy Odle and her husband, Phil, of Marion, IL and his older brother, Ken Anderson and his wife, Jane, of Marion, IL. He is also survived by his nieces and nephews; Julie (Anderson) Morgan of Hinsdale, IL, Laura (Anderson) Miles and her husband, Nathan, of Marion, IL, Rebecca Odle of Marion, IL, Rachel (Anderson) Brown and her husband, Nick, of Marion, IL, Sarah Beth Odle of Marion, IL, Elijah Odle of Marion, IL and Phoenix Odle of Marion, IL; his great-nephews; Parker Miles of Marion, IL and Zach Morgan of Hinsdale, IL; his best friend and constant companion; his beloved dog, Remy. Randy was loved by all and had many very dear aunts, uncles, cousins and friends. Randy’s family would especially like to thank his cousin, Terry Simmons, for all of the love, care and support that he gave to Randy. Randy was dearly loved and will be deeply missed by all those who had the great honor of knowing him. He was preceded in death by his father, Kenneth Cecil Anderson, and his infant brother, Lewis Wendell Anderson. Arrangements for Randy Keith Anderson were entrusted to the Wilson-McReynolds Funeral Home, 900 N. Court Street, of Marion, IL. The time of visitation for family and friends was on Wednesday, March 20, 2013, between the hours of 9:30 a.m. and 11:00 a.m. at the funeral home. During the time of visitation a “Reflection of Life” DVD Memorial Tribute featuring special people, places and events of Randy’s life was presented to the family and friends. Following the time of visitation the funeral service was at 11:00 a.m. with Rev. Scott Kallem presiding. Comments of memory were presented by Randy’s friend, Debbie Vaughn Murrie. The prelude and postlude musical selections were recorded piano selections. Special recorded vocal musical selections presented during the service were “Amazing Grace, My Chains Are Gone” by Chris Tomlin and “Homesick” by MercyMe. A special vocal musical selection presented to conclude the service was “The Blessing of Aaron” that was presented by Randy’s friends; Beth A. Butler, Melanie Yearack, Janeen Hancock Plumer, Van Travelstead, Harry Melvin, Debbie Vaughn Murrie, Gracie Reilly and Armetta Beltz. Armetta Beltz also accompanied the group on the piano. Interment followed in Spring Hill Cemetery located southeast of Marion in Williamson County. Pallbearers were Ken Anderson, Harry Melvin, Kenny Davis, Phil Odle, Chris Sparks and Deon Bundren. Honorary Pallbearers were Doug Murrie and Darrell Dunkin. Following the committal service at the cemetery the family and friends gathered at Randy’s mother’s home for a meal and continued time of fellowship and support. For additional information please contact the funeral home by calling 618-993-2131.

The family of Randy Keith Anderson created this Life Tributes page to make it easy to share your memories.