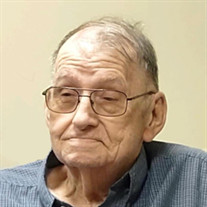 Robert C. “Bob” Boyd, age 90, of Ashland, MO and formerly of Marion, IL, passed away peacefully with his family by his side at 11:43 a.m. on Friday, January 21, 2022, at “The Bluff’s" in Columbia, MO. He was born on Sunday, December 13, 1931, in Creal Springs, IL, the son of Willie Harrison W. H. and Vira (Hill) Boyd. He enlisted into the United States Navy in St. Louis, MO, January 3, of 1951, and served on the Philippine Sea Carrier during the Korean War, and after his period of faithful service was honorably discharged in San Diego, CA, March 12, 1954. Robert was united in marriage to Wanda Lou Hunter on June 9, 1956, in the First Baptist Church of Marion by Rev. Lee Swope and together they have shared over sixty-five years of marriage. Robert grew up on the family farm and attended school in Creal Springs. After serving in Korea and returning home, he began working at Norge in Herrin, IL for nine years, he then worked for Giles Electric of Marion, for thirteen years and later began his sixteen-year mining career working for Peabody Coal at Shawneetown, IL, later for Old Ben Coal Mine No. 27 of West Frankfort, IL, and last at Brushy Creek Coal Mine of Galatia, IL, until his retirement in 1994. He began attending church in his youth at Mt. Moriah Baptist Church of Creal Springs, and later joined Marion First Baptist Church in May of 1956. He was a member of UMWA District 12 Local No. 2420 and the Marion Masonic Lodge No. 89 AF & AM of Marion, IL. He was an avid St. Louis Cardinal fan and earlier in his life he enjoyed fishing and hunting with his good friend Vernon Stanley. Later in his lifetime he enjoyed watching television, especially old westerns. He loved his family and was always interested in hearing about all the many activities in their lives. The many memories that have been created will now be cherished by those he leaves behind. He is survived by his wife, Wanda L. Boyd of Ashland, MO; daughter, Christy L. Warren and her husband, Derl Warren, II. of Linn, MO; two grandchildren, Ashton Warren and fiancé, Jordan Beadle of Ashland, MO and Chalyn Warren currently attending school in Rancho Palos Verdes, CA; great granddaughter; EllaMae Beadle of Ashland, MO; great grandson, Owen Beadle of Ashland, MO; special nieces, Judy Holmes and her husband, Roger of Creal Springs, IL, Mildred McDannel of KY, Carolyn Richards of Bloomington, IL, Debra Tennant of Benton, IL and Sue Wagner of Evansville, IN; nephew, Kenny Steele of Crab Orchard, IL, other extended family and many friends. He was proceeded in death by his parents and two brothers, Harol C. and Edward Boyd. Arrangements are entrusted to Wilson-McReynolds Funeral Home, 900 North Court Street, Marion, IL. The visitation will be from 10:00 a.m. to 1:00 p.m. on Saturday, January 29, 2022, at First Baptist Church, located at 401 West Union Street, Marion. Following the time of visitation, the funeral service will be at 1:00 p.m. with Dr. Bob Dickerson presiding. Interment will follow in Rose Hill of Marion, IL. Military honors will be accorded at the graveside by members of Marion V.F.W. Heyde Pillow Post No. 1301 Funeral Honors Detail and members of the United States Navy Funeral Honors Detail. The family has requested for those who prefer, memorial contributions be made to; “First Baptist Church” of Marion, IL. Memorial contributions may be mailed in care of Wilson-McReynolds Funeral Home, 900 N. Court Street, Marion, IL, 62959. Memorial contribution envelopes will be available at the church. For additional information call the funeral home at 618-993-2131. Due to the executive order by the Governor of Illinois, for all those attending the visitation and funeral service inside, the wearing of a face mask and practice of social distancing is suggested.

The family of Robert Cleo "Bob" Boyd created this Life Tributes page to make it easy to share your memories.