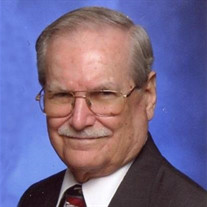 Robert W. “Bob” Goepfert, age 93, of Marion, IL and formerly of Carbondale, IL passed away peacefully at 3:05 a.m. on Friday, November 16, 2018, in Parkway Manor of Marion. He was born on Tuesday, May 12, 1925, in Belleville, IL, the son of Henry A. and Elizabeth (Hentzel) Goepfert. After graduation he answered the call of this nation by enlisting into the United States Navy in 1943, during the period of WW II in the Asian Pacific Theater, and after his period of faithful service was honorably discharges in 1946, with the rank of Storekeeper D 2nd Class. Returning home he used the GI Bill to further his education attending at William Jewell College of Liberty, MO where he received his Bachelor of Arts Degree. He continued on and received his Master of Theology Degree from Southern Baptist Seminary of Louisville, KY. Bob was united in marriage to Jacqueline Jean “Jackie” Thompson on Saturday, August 9, 1947, in 17th Street Baptist Church of Belleville and together they shared nearly 66 years of marriage until her death on Monday, March 4, 2013 . During his lifetime he has served on church pastorates in Kansas, Missouri and Illinois. He also has worked as a counselor at Southern Illinois University of Carbondale and retired as a correctional counselor with the Illinois Department of Corrections. He was an active member of the University Baptist Church of Carbondale where he served as deacon, Sunday school teacher, choir member and in church ministries. In his spare time he enjoyed being an avid reader, singing with barber shop quartets, serving as a hospital auxiliary volunteer, jogging and was a weight training enthusiast. Serving his Lord through serving others has always been forefront in his life. He loved his family and many friends and cherished the many times they spent together. The many memories created will now be cherished by those he leaves behind. He is survived by his daughter and son-in-law, Robin and David Businaro of Harrisburg, IL; son and daughter-in-law, Stephen and Cheryl Goepfert of Maryville, TN; five grandchildren, D. Matthew Businaro and his wife Tiffany, Mark Businaro and wife Katherine, Ann Goepfert Thonnes and her husband Matthew, Susan Goepfert Raymond and her husband Will and Katherine Goepfert Foust and her husband David; five great grandchildren, Avah Lynn and Justin Charles Businaro, Olivia Grace and Owen Carter Raymond and Nora Elizabeth Foust; brother and sister-in-law, Kenneth and Paula Goepfert of Woodstock, IL; special friend, Nell Hale of Marion, other extended family and many friends. He was preceded in death by his parents, wife, two sisters and three brothers. Arrangements were entrusted to Wilson-McReynolds Funeral Home, 900 North Court Street, Marion, IL. The time of visitation was from 11:00 a.m. to 1:00 p.m. on Monday, November 19, 2018 at the funeral home. Following the time of visitation the funeral service was at 1:00 p.m. with Brother Bob Nolan presiding. The prelude and postlude musical selections were presented by pianist, Sharon Emery. Special vocal musical selections presented during the service were “Somewhere Over the Rainbow” by great grandson, Justin Businaro, accompanied on the piano by Sharon Emery and “Amazing Grace” as a congregational hymn lead by Sharon Emery. Entombment followed in Pleasant Grove Memorial Park of Murphysboro, IL. Those serving as pallbearers were Stephen Goepfert, David Businaro, Matthew Businaro, Mark Businaro, Joe Emery, and Scott Thompson. Military honors were accorded at the mausoleum by members of the Paul Stout American Legion Post No. 127 of Murphysboro, IL and members of the United States Navy Funeral Honors Detail. Following the gravesie committal service at the cemetery family and friends gathered at O’Charley’s for a meal and continued time of fellowship and support. For those who preferred, memorial contributions were made to “SIU Carbondale Foundation” and mailed in care of Wilson-McReynolds Funeral Home, 900 N. Court Street, Marion, IL 62959. Memorial envelopes were available at the funeral home. For more information please call the funeral home at 618-993-2131.

The family of Robert Walter "Bob" Goepfert created this Life Tributes page to make it easy to share your memories.