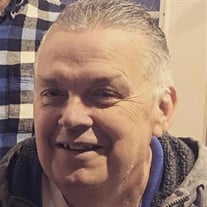 Roger Dale Ragain, age 65, of Cahokia, IL, passed away suddenly at work at 6:15 p.m. on Tuesday, January 21, 2020 in Town & Country, MO. Roger was born on Wednesday, June 9, 1954 in St. Louis, MO, the son of Kenneth Ray and Mary Helen (Strain) Ragain. He grew up in Cahokia, IL and was a graduated of Cahokia Senior High School Class of 1972 and was a member of the Maplewood Baptist Church. Roger began his working career with Boatman’s Bank printing department in St. Louis, MO and worked for the past thirty years for AAA of Missouri printing department. He enjoyed gardening and feeding the birds that gathered in his yard, and for many years raised Homing Pigeons and would travel hundreds of miles to release his pigeons to return home. He is survived by his two brothers and sisters-in-law, Ron and Billie Ragain of Trenton, IL and Jerry and Dianne Ragain of Cahokia; three nieces, Tiffany Ragain, Kristy Massey and husband, Kyle and Amy Ragain; two nephews, Colby Ragain and Jesse Ragain and wife, Megan and two cousins, Pattie Jo Green and husband, Mike and Terry Ragain; other extended family and many friends. He was preceded in death by his parents. Arrangements for Roger Dale Ragain have been entrusted to Wilson-McReynolds Funeral Home, 900 N. Court St., Marion. The visitation will be from 11:00 a.m. until 12:00 p.m. on Monday, January 27, at the funeral home. Following the time of visitation, the graveside service will be at 12:30 p.m. with Rev. Ivan Ryan presiding in Busby Cemetery in Goreville, IL. For additional information call the funeral home at 618-993-2131.

The family of Roger Dale Ragain created this Life Tributes page to make it easy to share your memories.

Send flowers to the Ragain family.