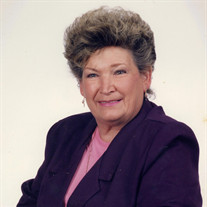 Stella Mae “Midge” Hill, age 97, of Perryville, MO, formerly of Marion, IL the Lake of Egypt area, passed away peacefully at 1:30 p.m. on Monday, May 27, 2019, in The Estates of Perryville in Perryville, MO. She was born on Saturday, March 11, 1922, in West Plains, MO, the daughter of Lewis V. and Thelma (Dobbs) Kolar. Stella attended school in St. Louis MO and was a graduate of Blow High School. She was united in marriage to James Lenard Hill on Saturday, January 6, 1973, and together they shared 46 years of marriage until his death on Wednesday, May 15, 2019. In the early 1930’s she was a waitress in her spare time and later became a bar tender until the late 60’s when she decided to tend to her family the rest of her days. Stella was a lover of gardening, planting flowers, all things “fancy” and shopping but her favorite hobby was having a good time with friends and loved ones. She is survived by her daughter and son-in-law, Connie J. and Wayne Ernst of Sedgewickville, MO; son-in-law: Roger D. Gross of Festus, MO; two step-daughters, Shirley Hill Flowers of Marion, IL and Laura Hill Serles of West Frankfort, IL; step-son, James L. Hill and his wife Dee Dee of Pevely, MO; 14 grandchildren, Randy Ernst and his fiancé Tina, Christine Ernst, Dustin Hill, Danielle Hill, Dailey Hill, Robert Hickman, John Hickman, Elizabeth Skeens, Lydia Serles, Isbell Flowers, Yvonne Flowers, Shannon Flowers, Sharon Flowers and Shawn Flowers and several great grandchildren. She was preceded in death by her parents, husband, daughter Patricia Kay Gross and son Gary Stephen Bernhardt. Arrangements were entrusted to Wilson-McReynolds Funeral Home, 900 N. Court St., Marion. The visitation was from 3:00 p.m. until 7:00 p.m. on Thursday, May 30th at the funeral home. The funeral service was at 10:00 a.m. on Friday, May 31, 2019, at Wilson-McReynolds Funeral Home with Rev. Ivan Ryan presiding. The prelude and postlude musical selections were recorded piano were recorded piano selections. Special recorded vocal musical selections presented during the service were “How Great Thou Art” and “Take My Hand, Precious Lord” both by Elvis Presley. Interment followed next to her husband and son in McKinney Chapel Cemetery, located south of Marion near the Lake of Egypt. Pallbearers were Randy Ernst, Roger Gross, John Michael Hickman and Dustin Hill. For more information please call the funeral home at 618-993-2131.

The family of Stella Mae "Midge" Hill created this Life Tributes page to make it easy to share your memories.