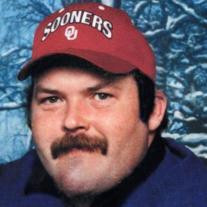 Steven D. “Steve” Eckols, age 39, of Marion, IL, passed unexpectedly in his sleep while working on a barge riverboat on the Mississippi River and was taken to Clarksville Lock and Dam No. 24 of Clarksville, MO where his time of death was at 9:50 a.m. on Monday, November 7, 2011. He was born on Thursday, January 13, 1972, in West Frankfort, IL, the son of Robert J. and Debra E. (Boyd) Eckols. Steve was employed by Inland Marine Service of Paducah, KY as a barge Lead Man and was formerly an over the road truck driver for many years. He enjoyed spending time with his family and many friends and listing to country music. He is survived by his daughter, Christina Eckols of West Frankfort, IL; his mother and stepfather, Debra E. and Jerry Tennant of Benton, IL; his father, Robert J. Eckols; his fiancée, Patricia Sellers of Marion, IL; sister, Molly Hollas of Metropolis, IL; three brothers Dean Avery of West Frankfort, IL and Marvin Lovekamp and Terry Lovekamp both of Metropolis, IL; two stepbrothers, Tim Tennant of DuQuoin, IL and Mark Tennant of West Frankfort, IL, several nieces, nephews other extended family members and many friends. He was preceded in death by his maternal grandparents, Edward and Louise Boyd and his paternal grandfather Gene Eckols. Arrangements for Steven D. Eckols were entrusted to Wilson-McReynolds Funeral Home, 900 N. Court Street, of Marion, IL. A time of visitation for family and friends was on Saturday, November 12, 2011, beginning at 11:00 a.m. until 1:00 p.m. at the funeral home. Following the time of visitation, the funeral service was at 1:00 p.m. at the funeral home with Rev. Edward “Shorty” Alsip presiding. Rev. Alsip read a special letter written about the memories of Steve’s childhood and him growing up titled “Letter from Mom” written by Steve’s mother, Debbie. The prelude and postlude musical selections were recorded piano selections. Special recorded vocal musical selections presented during the service were “Simple Man” by Lynyrd Skynyrd, “This Ain’t Nothing” by Craig Morgan and “I Believe When Jesus Died He Died for Me” by Bob Henderson. Interment followed in Rose Hill Cemetery of Marion, IL. Pallbearers were Kyle Tolbert, Sam Tubbs, Brian Whitecotton, Dean Avery, Marvin Loverkamp and Terry Loverkamp. After the committal service at the cemetery the family and friends gathered for a meal and continued time of fellowship and support at West City Church of God of West City, IL. For additional information please call the funeral home at 618-993- 2131.

Steven D. “Steve” Eckols, age 39, of Marion, IL, passed unexpectedly in his sleep while working on a barge riverboat on the Mississippi River and was taken to Clarksville Lock and Dam No. 24 of Clarksville, MO where his time of death was at... View Obituary & Service Information

The family of Steven D. "Steve" Eckols created this Life Tributes page to make it easy to share your memories.

Send flowers to the Eckols family.