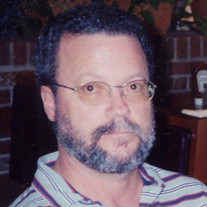 Steven “Steve” H. Wierman, age 63, of West Frankfort, IL passed away on Sunday, October 26, 2014, at Herrin Hospital in Herrin, IL. He was born on Thursday, March 29, 1951, in Davenport, IA the son of Alan and Marianna (Moore) Wierman. Steve was united in marriage to Debbi (Bearden) Kearney, at the Lake of Egypt and together they have shared over 22 years of marriage. Steve spent his early years in Davenport, Iowa where he enjoyed playing sports. At 11 his family moved to Arlington Heights, IL where he began to develop a love of music and learned to play the guitar. The family moved during his senior year and Steve graduated from Brookfield East High School in Brookfield Wisconsin in 1969. Steve had aspirations for college, with a career in arts and music. However, during his late teens he began to struggle with alcohol and drug addictions. He suffered many personal, family, education and career losses due to his years of substance use. In 1985 Steve entered a residential substance abuse treatment program. While in treatment Steve recognized how others were similarly affected by their addictions. These insights motivated Steve to remain focused on his recovery and his family. He successfully completed the treatment program and began to alter the course of his life by continuing his education with new career goals. Steve graduated from Ohio State University in 1989 with a BS in Psychology and in 1990 from Southern Illinois University with a Masters in Rehabilitation. He was a Licensed Clinical Professional Counselor and worked for several years at Franklin-Williamson Human Services in Marion in the Substance Abuse Division, initially as a counselor, then as a manager of the Residential Substance Abuse Program. In 1995, Steve became the Assistant Director of Gateway Youthcare Residential Substance Abuse Treatment Center in Carbondale, IL. Later that year he became the Director and held that position until his death. Throughout his professional career Steve remained dedicated to providing treatment options for those struggling with addictions and to provide opportunities so that they could make positive changes in their lives. At his death, Steve had worked for Gateway Foundation for 19 years and had maintained sobriety for 29 years. During the 24 years that he worked in the Substance Abuse field Steve impacted numerous lives. Steve remained focused on the purpose of his profession and the responsibility that he had to those seeking services. To his coworkers he was a mentor who provided both guidance and wisdom. Steve had a passion for music. He was an accomplished musician and had entertained many with his amazing guitar skills. During the last twenty years he had played in various bands in the Southern Illinois area, usually with friends and coworkers including John Shadowens, Ralph Wood, Willie Deuel and Ruvane Kurland. Steve was also fond of animals, having numerous cats and dogs since childhood. He is survived by his wife, Debbi Wierman of West Frankfort, IL; two daughters and sons-in-law, Katie and Bill Kuder and Beth and Noah Rubin all of Seattle, WA; two sons, Jared Kearney and Dean Atkinson both of Marion, IL; beloved granddaughter, Mary Olivia “Mimi” Rubin of Seattle, WA; two brothers and sisters-in-law, Doug and Connie Wierman of Dripping Springs, TX and Brad and Tracey Wierman of Bend, OR; mother-in-law, Mary Bloodworth of Marion, IL; sister-in-law, Kathie Price and husband, Ronnie of Marion, IL and brother-in-law, Bill Bearden of Marion, IL; other extended family members and many friends. Steve was preceded in death by his parents and son, Matthew David Kearney, April 5, 1999. Arrangements for Steven “Steve” H. Wierman were entrusted to the Wilson-McReynolds Funeral Home, 900 N. Court Street, of Marion, IL. The time of visitation was from 5:00 p.m. until 8:00 p.m. on Monday, November 3, 2014, at the funeral home. During the time of visitation a “Reflection of Life” DVD Memorial Tribute featuring special people, places and events in Steve’s life was presented to the family and friends. The funeral service was at 1:00 p.m. on Tuesday, November 4, 2014, at Wilson-McReynolds Funeral Home with Rev. Derek Shaw presiding. Comments of memory were presented by Steve's friend and co-worker, John Courshon. The prelude and postlude musical selections were recorded selections by Steve. Special recorded instrumental musical selection “Peaches En Regalia” by Frank Zappa was presented at the close of the service. Interment followed in Rose Hill Cemetery of Marion, IL. After the service the family and friends gathered at Debbi and Steve’s home for a meal and continued time of fellowship and support. For those who preferred, memorial contributions were made to “Gateway Foundation” or the no kill shelter “Wright-Way Rescue”. Memorial contribution envelopes were available at the funeral home or were mailed in care of Wilson-McReynolds Funeral Home, P.O. Box 370, Marion, IL, 62959. For additional information please call the funeral home at 618-993-2131.

The family of Steven H. Wierman created this Life Tributes page to make it easy to share your memories.

Send flowers to the Wierman family.