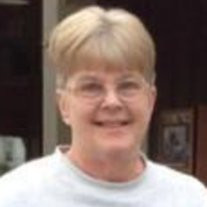 Suzan J. “Suzie” Nichols, age 66, of Marion, IL, passed away suddenly at 12:41 p.m., on Sunday, August 18, 2013, at her home. She was born on Monday, June 30, 1947, in Carbondale, IL the daughter of Warren Roger “Red” and Winifred Jane “Winnie” (Vaughan) Wallin. Suzie attended school in Marion and was a graduate of Marion High School in 1965. She later attended nursing school at Kirksville College of Osteopathic Medicine graduating as a Licensed Practical Nurse in 1976. Shortly after graduation in 1976, she began working at Marion Memorial Hospital in the Intensive Care Unit. She continued working at Marion Memorial and when the new Heartland Regional Medical Center was complete, transferred there to the Intensive Care Unit. After 31 years of nursing she decided to retire in 2006. Suzie was of the Protestant faith. After her retirement she enjoyed attending and spending time at the Marion Senior Citizens Center. She also enjoyed her quiet times in the mornings having a cup of coffee, spending time taking care of her yard and animals. Suzie was a devout “Wildcat Fan” and when her children were in school and involved in their many activities she was known as a “Marion Wildcat Mom”. She truly loved her family and was always very supportive and interested in all of their many activities. The many memories that have been created will now be cherished by those left behind. She is survived by her son and daughter-in-law, P.J. and Julie Nichols of Waterloo, IL; two daughters, Lesleigh Furry of Herrin, IL and Angela Shaw of Christopher, IL; six grandchildren, Taelor and Juleigh Furry both of Herrin, IL, Jansen and Josie Nichols both of Waterloo, IL and Emileigh and Kyleigh Shaw both of Christopher, IL; brother and sister-in-law, Tom and Judy Wallin of Springfield, IL; niece, Laura Waldinger and husband, Corey of Naperville, IL; nephew, Tim Wallin and wife, Brittany of Puerto Rico, other extended family and many friends. She was preceded in death by her parents and nephew, Jeff Wallin. Arrangements for Suzan J. “Suzie” Nichols were entrusted to Wilson-McReynolds Funeral Home, 900 N. Court St., Marion, IL. The time of visitation for family and friends was on Thursday, August 22nd, from 5:00 p.m. until 8:00 p.m. at the funeral home. During the time of visitation a “Reflection of Life” DVD Memorial Tribute featuring special people, places and events of Suzie’s life was presented to the family and friends. The funeral service was at 11:00 a.m. on Friday, August 23, 2013, at Wilson-McReynolds Funeral Home with Rev. Steve Neill, minister of First Baptist Church of Waterloo, IL, presiding. There were many comments of memory, during a “Time of Sharing”, by those attending. The prelude and postlude musical selections were recorded piano selections. Special recorded vocal musical selections presented during the service were “You’ll Be In My Heart” by Phil Collins, “Wind Beneath My Wings” by Bette Midler and “I Can Only Imagine” by MercyMe. Interment followed next to her parents in Maplewood Cemetery of Marion, IL. Pallbearers were P.J. Nichols, Tom Wallin, Alex Walters, Brandon Hill, Charles Price and Terry Hill. For those who preferred, memorial contributions were made to the “American Heart Association”. Memorial contribution envelopes were available at the funeral home or were mailed in care of Wilson-McReynolds Funeral Home, P.O. Box 370, Marion, IL, 62959. For additional information please contact the funeral home by calling 618-993-2131.

The family of Suzan J. "Suzie" Nichols created this Life Tributes page to make it easy to share your memories.