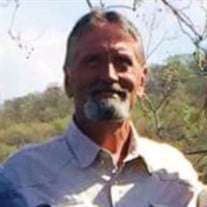 Terry Dalton Brown, age 60, of St. Charles, MO, and formerly of Marion, IL, passed away peacefully at 7:20 p.m. on Friday, October 27, 2017, at the home of his daughter in Carterville, IL. He was born on Sunday, August 18, 1957, in St. Charles, MO, the son of Ivan Huey and Leota Fern (King) Brown. He grew up in St. Charles, MO before moving to Marion, IL. Terry answered the call of his nation by serving in the United States Army and was honorably discharged in October of 1975. He was employed for many years by and retired from the Veteran’s Administration Hospital in Marion. He was of the Baptist faith and a member of the American Legion Post No. 0312 of St. Charles, MO. Terry had many interests. He was a St. Louis Cardinal fan, liked to fish on the bank of the Missouri river, and enjoyed reading, astronomy, and studying the stars. He was a talented musician and always enjoyed playing his guitar. He was also an excellent artist and expressed his talent working in different medias. His work has been displayed in the St. Louis Museum and the Washington, DC Museum. He is survived by his mother, Leota Brown of St. Charles, MO; two daughters, Sommer North of Carterville, IL and Rachel Rask of Thompsonville, IL; one granddaughter, Jordyn North of Carterville, IL; three grandsons, Layne North of Carbondale, IL, Peter Rask, V of Carterville, IL, and Jacob Brown of Thompsonville, IL; one brother, Michael Brown of St. Charles, MO; other extended family members, and many friends. He was preceded in death by his son, Jeremy Brown, May 22, 1996 and his father, Ivan H. Brown, on April 13, 2015. Arrangements have been entrusted to Wilson-McReynolds Funeral Home, 900 N. Court St., Marion. The visitation will be from 12:00 p.m. until 2:00 p.m. on Tuesday, October 31, at the funeral home. Following the time of the visitation the funeral service will be at 2:00 p.m. on Tuesday, October 31, 2017, with Rev. John Parton presiding. Interment will follow in Maplewood Cemetery. For those who prefer, memorial contributions may be made to “Hospice of Southern Illinois” and mailed in care of Wilson-McReynolds Funeral Home, 900 N. Court Street, Marion, IL 62959. Memorial envelopes will be available at the funeral home. For additional information call the funeral home at 618-993-2131.

The family of Terry Dalton Brown created this Life Tributes page to make it easy to share your memories.