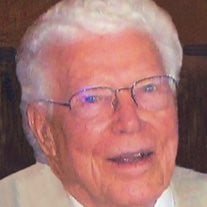 Thomas James Rhoades, age 90, of Marion, IL and formerly of DuQuoin, IL, passed away peacefully at 6:30 a.m. on Tuesday, May 21, 2013 in the Veterans Affairs Medical Center in Marion, IL. He was born on Friday, June 23, 1922, in St. Louis, MO the son of Blaine and Loretto (O’Brien) Rhoades. He grew up in St. Louis, Mo and was a graduate of St. Louis University High School. He entered the United States Army Air Force in 1944 and served in World War II with four of his brothers, 1st Lieutenant Jack Rhoades, Major Bob Rhoades, 2nd Lieutenants Dan & Don Rhoades. He was a 47P single engine fighter pilot and served in the European Theatre and was honorably discharged, as a 1st Lieutenant, January 13, 1946. After the war he entered the garment manufacturing industry working for Forest City and Country Set garment companies before he retired. Thomas was united in marriage to Maxine T. Borowiak on Wednesday, October 2, 2001 in St. Joseph Catholic Church in Marion, IL and together they shared over eleven years of marriage. He was a lifelong member of the Catholic Church and was a member of St. Joseph Catholic Church in Marion, IL. He is survived by his wife, Maxine Borowiak-Rhoades of Marion, IL; one daughter and her husband Jeanne and Bill Lucas of Tonawanda, NY; three sons and their wives, Michael and Barbara Campeau of St. Louis, Richard and Jackie Rhoades of Paonia, CO and Jonathan and Robyn Rhoades of Cape Girardeau, MO; four grandchildren, Ian, Meredith, Arj’e and Nathan; two great grandchildren, Broson and Maryn; one brother and his wife, Dan and Doris Rhoades; other extended family and many good friends. He was preceded in death by his parents; his infant son, Tommy Rhoades; two sisters, Susan Nouss and Alice Canapa and five brothers, Jack, Bob, Jim, Don and David Rhoades. Arrangements for Thomas James Rhoades were entrusted to the Wilson-McReynolds Funeral Home, 900 N. Court Street, of Marion, IL. The time of visitation was between 10:00 a.m. and 11:00 a.m. on Monday, May 27, 2013, at St. Joseph Catholic Church located at 600 N. Russell St., Marion, IL. During the time of visitation a “Reflection of Life” DVD Memorial Tribute featuring special people, places and events of Thomas’ life was presented to the family and friends. Following the time of visitation the funeral mass was at 11:00 a.m. with Monsignor Thomas D. Flach and Father Richard Mohr presiding. The music of the mass was presented by organist, Valerie Oestry. Hymns of the mass were led by cantor, Patty Heckel. Thomas’ son, Michael presented readings from the Old and New Testament. The hosts for the communion service were brought up to the altar by Thomas’ son and daughter-in-law, Jonathan and Robyn. Comments of memory were presented by his nephew, Marlott Rhoades. Comments of memory and reading of Irish poem was by his granddaughter, Arj’e Crawford. Following the service the family and many friends gathered at the Family Life Center of the church for a meal and continued time of fellowship and support. Interment followed on Tuesday, May 28th at 11:00 a.m. in Jefferson Barracks National Cemetery of St. Louis, MO with Monsignor Thomas D. Flach and Father Lawrence Herzog presiding. Military honors were presented at the cemetery and the folded flag was presented to Thomas’ wife, Maxine. For those who preferred memorial contributions were made to “Wounded Warrior Project” or the “Salvation Army”. Memorial contribution envelopes were available at the church and funeral home or were mailed in care of Wilson-McReynolds Funeral Home, P.O. Box 370, Marion, IL 62959. For additional information please call the funeral home at 618-993-2131.

The family of Thomas James Rhoades created this Life Tributes page to make it easy to share your memories.

Send flowers to the Rhoades family.