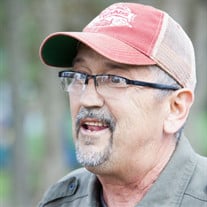 Timothy Scott Mocaby, age 54, of Marion, IL passed away at 02:15 p.m. on Monday, April 9, 2018 at the VA Medical Center of Marion, IL. He was born on Sunday, March 29. 1964 in Marion, IL the son of Lowell Lewis Mocaby and Barbara Gayle (Curry) Bourland. He attended school in Marion and was a graduate of Marion High School Class of 1982. Tim answered the call of his nation by enlisting in the United States Navy in May 1981. Following his period of faithful service he was honorably discharged in April of 1985. Tim was in the construction business for over thirty years. He worked all over the United States as a self-employed iron worker using all types of commercial steel. He grew up attending Second Baptist Church of Marion and was a member there. Tim began dating April D. Hines in 2010 and together they blended their families. Bailey, April’s daughter, was like the daughter Tim never had. He was a huge part of her life and helped to raise her. As a family they went on several vacations and visited him on his many different job sites in several states. Tim was an avid Harley Davidson Motorcycle rider since the age 16. He also enjoyed collecting watches and cowboy boots. He was a fan of country music and enjoyed cooking and barbequing for his family at their many get togethers. Tim loved his family and enjoyed spending time with them and was always interested and all of their many activities. He loved being “Papa Dunk” to his three grandsons. Tim and his family got to have a big birthday celebration this year where all of his children and grandchildren go to be there. The many memories that were created will now be cherished by those he leaves behind. He is survived by his fiancée, April D. Hines of Marion, IL; three sons and one daughter-in-law; Joshua Thomas Mocaby and his companion, Annie Endicott, Matthew Brett Mocaby of Covington, GA, and Devon Cole Mocaby and his wife, Jamie, of Conyers, GA; step-daughter, Bailey R. Hines of Marion, IL; three grandsons, Cooper John Mocaby and Calien Richard James Mocaby both of Litchfield, CT and Dallas Mocaby of Covington, GA; mother, Barbara G. Bourland of Marion, IL; three brothers and one sister-in-law, William “Billy” Bourland and his wife, Beverly, of Rutledge, GA and John Michael Mocaby and James “Jimbo” Bourland both of Marion, IL; three sisters and two brothers-in-law, Rebecca Bourland and her companion, Ted Clendenin, of Marion, IL, Valerie “Cricket” Fry and husband, Steven, of Crab Orchard, IL, and, Debbie Atkisson and husband, Rick, of Marion, IL; other extended family, and many friends. He was preceded in death by his father; step-father, James E. Bourland; brother, Thomas Wayne “Tommy” Mocaby; and sister, Laura Leit “Peanut” Dirks. Arrangements for Timothy S. Mocaby were entrusted to Wilson-McReynolds Funeral Home, 900 N. Court St., Marion. The visitation was on Saturday, April 21, 2018, from 11:00 a.m. until 1:00 p.m. at the funeral home. During the visitation a “Reflection of Life” DVD Memorial Tribute was presented to the family and friends and featured special people, places, and event’s of Tim’s life. Following the time of visitation the memorial service was at 1:00 p.m. with Shane Millwood presiding. The prelude musical selection was a recorded vocal of “Daniel” by Elton John. Special recorded vocal musical selections presented during the service were “One More Day” by Diamond Rio and “When I Get Where I’m Going” by Brad Paisley featuring Dolly Parton. Special vocal musical selection presented was “Go Rest High on that Mountain” by Thomas Tillman and Mark Johnson who accompanied themselves on the guitar. Special comments of memory were presented by Tim’s friend, Carter Hook. Interment followed next to his brother, Tommy, in Rose Hill Cemetery of Marion. Military honors were accorded at the cemetery by members of Heyde-Pillow V.F.W. Post No. 1301 of Marion, and members of the United States Navy Funeral Honors Burial Detail. V.F.W. members participating were Officer of the Day, Ernie Rinella, Chaplin, Ray Hancock, Commander, Dan Fruge, Bugler, Bill Rice, National Colors, John Andrew, Post Colors, Bob Maurizio, Color Guard, Herbert Robinson and Bill Hatfield, and Firing Squad, Art Ambros, Gene Broombaugh, Mike Gunter, Bill Hampsey, Merlin Koester, Ron Phillips, and Bob Wallace. Special vocal musical selection presented at the cemetery was “Lead Me Home” by Shane Millwood, accompanied by Thomas Tillman and Mark Johnson on the guitar. Following the graveside committal service family and friends gathered at the Marion V.F.W. Post No. 1301 for a meal and continued time of fellowship and support. For those who preferred memorial contributions were made to either or both “Wounded Warriors Project” and “St. Jude Children’s Research Hospital” and mailed in care of Wilson-McReynolds Funeral Home, 900 N. Court Street, Marion, IL 62959. Memorial envelopes were available at the funeral home. For additional information call the funeral home at 618-993-2131.

The family of Timothy Scott Mocaby created this Life Tributes page to make it easy to share your memories.

Send flowers to the Mocaby family.