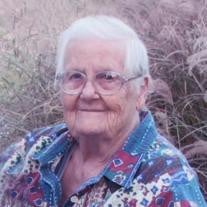 Violet M. Segers, age 92, of Pittsburg, IL, went home to be with her Lord at 12:04 p.m. on Thursday, August 23, 2012, at her home with her family by her side. She was born in Marion, IL on Thursday, February 5, 1920, the daughter of James Wilson and Ada Myrtle (Brandon) Marks. Violet was first united in marriage to Carl Ralph Eugene Stokes who was killed in action during WW II. She later was united in marriage to Nople H. Segers on Friday, January 18, 1946, in Mississippi County, Arkansas. Together they shared fifty-nine years of marriage until his death on Saturday, April 23, 2005. Violet never worked outside of her home but was always attentive to the needs of her family and maintained their home. She currently attended, when her health permitted, Pittsburg Freewill Baptist Church of Pittsburg, IL. Her family and church was a very important part of her life and she was always ready to help others in their time of need. She loved the many times the family would all gather together. Violet enjoyed traveling with her family and camping especially at Ferne Clyffe, Metropolis and Rend Lake. She enjoyed going to yard sales, going out to eat and was always on the go. Violet made a difference in the lives of those she had contact with and will be sadly missed by all of her family and many friends. The family would like to thank the many friends and caregivers that have helped during this difficult time. She is survived by her son and daughter-in-law, Carl J. “Jeff” and Deloris Stokes of Stonefort, IL; two daughters and sons-in-law, Mary and Charles Phillips of Pittsburg, IL and Sandy and Steve Crain of Crab Orchard, IL, 16 grandchildren, 45 great grandchildren, 29 great-great grandchildren; son-in-law, Greg Smith of West Frankfort, IL and a host of nieces and nephews, other extended family members and many friends. She was preceded in death by her parents; step mother, Mary (Lannon) Marks; first husband, Carl Ralph Eugene Stokes; second husband, Nople H. Segers; infant son, Wilson Eugene Stokes; two daughters, Violet Lea Smith on February 9, 2006 and Louise Holmes on January 4, 2009; four grandchildren, Gilbert Eugene Holmes, Jimmie Dean Holmes, Donnie “Fred” Holmes and Randy Keith Holmes; sister, Ada Lea Sullivan and brother, Bill Marks. Arrangements for Violet M. Segers were entrusted to Wilson-McReynolds Funeral Home, 900 N. Court St., Marion, IL. The time of the visitation for family and friends was from 11:00 a.m. until 1:00 p.m. on Saturday, August 25, 2012 at the funeral home. During the time of visitation a “Reflection of Life” DVD Memorial Tribute featuring special people, places and events of Violet’s life was presented to the family and friends. Following the time of visitation the funeral service was at 1:00 p.m. with Rev. Charles Bowers presiding. The prelude and postlude musical selections were recorded piano selections. Special recorded vocal musical selections presented were “One Day at a Time” by Cristy Lane, “Peace In the Valley” by Elvis Presley and “I’ll Fly Away” by Vern Gosdin. Interment followed next to her husband in McKinney Chapel Cemetery near the Lake of Egypt. Pallbearers were Dwayne Stokes, Dean Newbold, Chris Phillips, Doug Holmes, Mike Holmes and Vicky Babb. For those who preferred memorial contributions were made to “Hospice of Southern Illinois” and mailed in care of Wilson-McReynolds Funeral Home, P.O. Box 370, Marion, IL 62959. Memorial envelopes were available at the funeral home. For additional information please contact the funeral home by calling, 618-993-2131.

The family of Violet M. Segers created this Life Tributes page to make it easy to share your memories.

Send flowers to the Segers family.