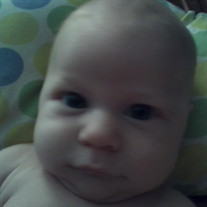 Westley Alexander Marchal, age 10 weeks, of Marion, IL, infant son of Bryan and Vanessa (Travelstead) Marchal, passed away at 12:16 a.m. on Friday, September 19, 2014, at Heartland Regional Medical Center of Marion, IL. Westley is survived by his parents, Bryan and Vanessa (Travelstead) Marchal and his sister, Kaylee Marchal all of Marion, IL; maternal great-grandmother, Claire (Travelstead) Giles; maternal grandfather, Van Travelstead; paternal grandparents, Janis and Richard Marchal; maternal uncles, Jarrod Travelstead and his wife, Teresa and Jonathan Travelstead and his fiancé, Heidi Kocher; maternal aunt, Jennifer Musoiu and her husband, Robert; paternal uncles, David Marchal and his wife, Stephanie and Phillip Marchal and his wife, Jodi; paternal aunts, Heather Rinderer and her husband, Dan and Daniella Hewitt and her husband, Robert. Arrangements for Westley Alexander Marchal were entrusted to the Wilson-McReynolds Funeral Home, 900 N. Court Street, of Marion, IL. The time of visitation was from 5:00 p.m. to 6:00 p.m. Friday, September 26, 2014, at the funeral home. Special recorded vocal musical selections presented during the time of visitation were; “Mad World” by Gary Jules, “Sweet Dream” by Greg Laswell, “Tears In Heaven” by Eric Clapton, “World Spins Madly On” by The Weepies, “Not Right Now” by Jason Gray, “C’est la Mort” by The Civil Wars, “Black Bird” by Evan Racel Wood, “Let It Be” by Carol Woods & Timothy T. Mitchum and “In the Arms of an Angel” by Sarah McLachlan. Following the time of visitation the memorial service was at 6:00 p.m. with the Rev. Dr. Hal Landwher officiating. A special poem called “Gospel” was read by and written by Jonathan Travelstead. Special recorded vocal musical selections presented during the service were “You Raise Me Up” by Josh Groban and “Somewhere Over the Rainbow/What a Wonderful World” by Israel Kamakawiwo’ole. The family requested instead of flowers that donations be given in honor of Westley Alexander Marchal to “St. Jude’s Children’s Hospital” or any other children’s related organization. For additional information, please the call the funeral home at 618-993-2131.

The family of Westley Alexander Marchal created this Life Tributes page to make it easy to share your memories.