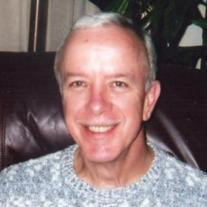 William Paul “Bill” Novick, age 60, of Marion, IL passed away at 8:07 p.m. on Sunday, December 16, 2012, at his home. He was born on Wednesday, July 23, 1952, in Carbondale, IL the son of William J. and Clara Ruth (Paul) Novick. Bill attended school in Marion, IL and graduated from Marion High School in 1968. He continued his college education by attending at the University of Illinois in Champaign, IL and later at Southern Illinois University of Carbondale, IL where he received his Law degree. Most of his working career was with his law practice in Marion, IL. He was in partnership with his father under the law firm name of Novick Law Office until his father retired in 2011. The only time he practiced law outside of Marion, was when he was a corporate attorney in Texas for 3 years. Bill was united in marriage to Paula Anne Cox on Friday, November 16, 2001, in Marion, IL and together they have shared the last eleven years of marriage. He was of the Baptist faith. In his spare time he enjoyed barbequing and spending time with his many friends that meant a lot to him; playing the guitar and singing many of his own songs that he had written and he was an avid sports fan. He also will be remembered for the many donated hours of legal advice and work he did for those who had a need. Though he always kept busy through work and all his other activities, the most important part of his life was his family, especially enjoying those quiet days just spending time with his daughter, Riley and wife, Paula. The many memories that were created will now be cherished by those he leaves behind. He is survived by his wife, Paula Anne Novick of Marion, IL; daughter, Riley A. Novick of Marion, IL; three sons and one daughter-in-law, Adam R. Novick of Marion, IL, Jay A. Novick and his wife, Devon of Herrin, IL and Thomas Parshudie of Carbondale, IL; granddaughter, Leah A. Novick, of Marion, IL; grandson, Dax May, of Herrin, IL; brother, Walter E. Novick of San Diego, CA; niece, Hannah S. Novick of San Diego, CA; nephew, Alex J. Novick of Scottsdale, AZ, other extended family and many friends. He was preceded in death by his parents. Arrangements for William Paul “Bill” Novick have been entrusted to the Wilson-McReynolds Funeral Home, 900 N. Court Street, Marion, IL. In accordance to Bill’s wishes there will not be any public visitation or services conducted at this time. A “Celebration of Life” memorial service will be at a later date. For those who would like to make a memorial contribution in Bill’s memory, contributions may be made to his wife “Paula Novick” to help with final expenses. Memorial contribution envelopes will be available at the funeral home or may be mailed in care of Wilson-McReynolds Funeral Home, P.O. Box 370, Marion, IL, 62959. For additional information please contact the funeral home by calling 618-993-2131.

The family of William Paul "Bill" Novick created this Life Tributes page to make it easy to share your memories.