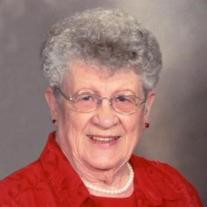 Winifred J. “Winnie” Wilson, age 85, of Marion, IL passed away at 12:40 p.m. on Saturday, September 29, 2012, in Parkway Manor of Marion, IL. She was born in Galatia, IL on Saturday, May 28, 1927, the daughter of Gill and Madia (Gentry) McConnell. Winnie, as she was known, attended school in Galatia and was a graduate of Galatia High School. She was united in marriage to Leonard Dale “Lyndale” Wilson in the First Baptist Church of Galatia, IL on Saturday, October 18, 1947, and together they shared over sixty-four years of marriage until his death on Thursday, December 29, 2011. Early in her lifetime she worked outside of the home for a short time but for most of her lifetime she enjoyed being at home seeing to the needs of her family and managing her home. She was a member of the Spillertown Baptist Church, where she regularly attended and was actively involved. After her husband’s retirement they bought a Dodge Dually Truck and a 36 foot 5th wheel camper. From 1984 until 1994 they would travel to Florida, near Kissimmee, each year to spend the winter. They also made many trips out west visiting family and touring the country. In her spare time she enjoyed playing bingo, doing needle work, knitting and crocheting, caring for her flowers and plants and listening to and watching Cardinal baseball. She also enjoyed spending time with her family and many friends. The memories that have been created will now be cherished by those she leaves behind. She is survived by her son and daughter-in-law, Dale “Squeak” and Pat Wilson of Marion, IL; three granddaughters, Jo Anna Roth of Pittsburg, IL, Angie Shannon of Marion, IL and Valerie Long and her husband, Eddie of Marion, IL; grandson, Andrew Wilson of Carbondale, IL; great granddaughter, Alyssa Long of Marion; two great grandsons, Michael Wilson and Brandon Long both of Marion, IL; sister and brother-in-law, Delores and Simon Muestermann of Marion, IL; brother and sister-in-law, Frank and Maddie McConnell of Mountain Home, AR; sister-in-law, Violet L. “Ruby” Petersen and husband, Gayle of Marion, IL; her special companion terrier, Buster, other extended family and many friends. She was preceded in death by her parents, husband; sister, Virginia Sullivan and brother, Pete McConnell. Arrangements for Winifred J. "Winnie" Wilson were entrusted to Wilson-McReynolds Funeral Home, 900 N. Court Street, of Marion. The time of visitation was from 11:00 a.m. to 1:00 p.m. Thursday, October 4, 2012 at Wilson-McReynolds Funeral Home, followed by the funeral service at 1:00 p.m. with Rev. Steve Shea presiding. The prelude and postlude musical selections were recorded piano selections. Special recorded vocal selections presented during the service were “What a Day That Will Be” by Brian Free & Assurance, “Amazing Grace” by Cristy Lane and “Go Rest High on That Mountain” by Vince Gill. Interment followed next to her husband, Leonard Dale in Egyptian Memorial Gardens Cemetery of Energy, IL. Pallbearers were Andrew Wilson, Scott McConnell, Michael Wilson, Tim McConnell, Jim Hensgen and Eddie Long After the committal service at the cemetery the family and friends gathered at the Marion Eagles Club for continued time of fellowship and a meal provided by Spillertown Baptist Church. For those who preferred, memorial contributions were made to “The American Cancer Society” and mailed in care of Wilson-McReynolds Funeral Home, P.O. Box 370, Marion, IL 62959. Memorial envelopes were available at the funeral home. For additional information please contact the funeral home by calling 618-993-2131.

The family of Winifred J. "Winnie" Wilson created this Life Tributes page to make it easy to share your memories.